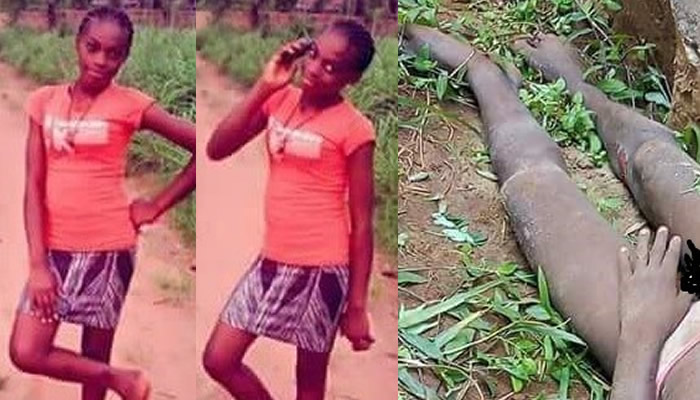 According to Facebook user Nnadozie Onwubiko, who shared the report, Chioma was ambushed by unknown men on her way home. She was gang raped, murdered and her body dumped by the roadside.

THE UNPRECEDENTED RATE OF RAPE OF YOUNGSTERS IN ANAMBRA STATE HAS BECOME A MENACE… THIS YOUNG GIRL WAS GANG RAPED AND MURDERED IN OBA… HER MUTILATED REMAINS ARE TOO GRUESOME BUT ARE UPLOADED HERE SO WE SEE THE LOW LIVES THAT MOVE AROUND AS YOUNG PERSONS… Someone reported that this incident happened about this week but the rapists are on the run… NIGERIA POLICE AND DSS THAT ARE GOOD IN CRUSHING IPOB UNARMED PROTESTERS MUST FETCH THESE DEADLY RAPISTS AND GET THEM PROSECUTED AND FACE THE FIRING SQUAD..

“Whatever you’re doing in this world remember that karma exists..
What goes around comes around”

This innocent girl chioma from umuokpa village Oba!
she lives with her mother at ogwugwu oba
Was abushed by unknown men..they raped and slaughtered her…i suggest they killed her because maybe the girl knows them or they fear she might recognize them..
Honestly ndi mmadu nwelu obi!!”.