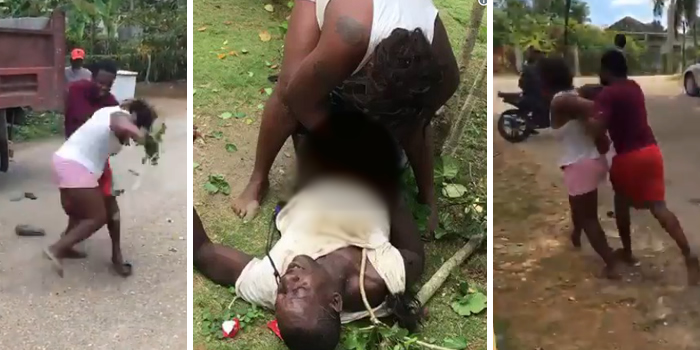 Lady overpowers and tries to rape a man In public (Video)

A video currently making rounds on social media, shows the moment a lady was trying to sexually assault a man publicly. In the shocking video, the lady was seen trying to forcefully pull off the underwear of the man after overpowering him.

Nobody wanted to help the man as the lady tried to rape him in public. However, a man later summoned courage and confronted the lady, while the male victim fled. The lady fought the good Samaritan who came to help the victim.

Shocked Twitter user who shared the video which has amassed over 2 million views in just hours, wrote:

“So everybody was just going to stand there watching her rape him? I can swear the energy is different when the genders are switched.”

Watch the shocking video below;

‘No Girl In This Country Is Richer Than Bobrisky’

Video: Boy begs for mercy as he's tied to a metal cross and subjected to multiple electric shocks