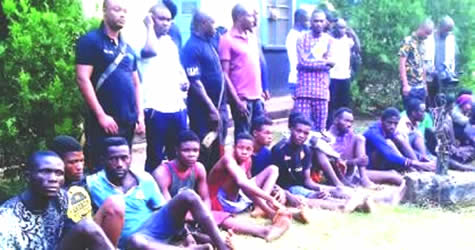 Libya deportee indulge in criminal activities in Edo, arrested with 61 other suspects

NO fewer than 62 persons, including a Libyan deportee, Destiny Kelly, have been arrested by the Edo State Police Command for various criminal offences in the state.

The Commissioner of Police, Mr. Johnson Kokumo, who disclosed this to journalists, explained that the suspects were arrested between December, 2017 and January, 2018.

Kokumo stated that the police command recovered several items, including seven AK47 rifles, one pump-action gun, 34 cut-to-size guns, one toy gun, a machete and a face mask, from the suspected criminals.

He also said seven operational vehicles used by the suspects were recovered.

The Libyan deportee, Kelly, he said, was picked up by policemen on December 2, 2017, along with his accomplices, for allegedly abducting and robbing a female corps member.

The two accomplices were identified as Christopher Agbonugo, 29, and Endurance Aburimeh, 23.

Aburimeh confessed that the gang picked up their victim, one Joseph Jennifer, at Ramat Park, en route to Ring Road.

Wife confronts husband and his sidechic at a hotel in Benin

He explained that his gang member, Agbonugo, posed as a cab operator, while Kelly and himself (Aburimeh) pretended to be passengers.

He said as the car approached the Ikpoba slope area, the suspects tortured their victim and forced her to surrender her mobile phone, N4,000 cash and ATM card.

However, they were said to have run out of luck when the victim’s phone was tracked by the police, leading to Christopher’s arrest.

Narrating her ordeal, Jennifer said the hoodlums failed in their bid to empty her bank account as it had not been authorised for withdrawals.

She said, “I was coming from Uromi, so the bus driver dropped us at Ramat Park. I needed to take a taxi to Ring Road. As I was inside (the taxi) around Ikpoba slope, suddenly, I felt a shock and before I knew it, my head was between the legs of one of them.

“They started to hit me on the head. The more I begged, the more they hit me. So, I gave them my bag and everything. One of them went to the bank to collect money from my bank account but he could not collect money.

“They became angry and beat and tortured me in the car. Even I could not withdraw money from the account because the Federal Government just paid money into the account and had not opened it for my use.”

Kelly, who said he was deported from Libya in February, 2017, claimed to have engaged in robbery only once.

“I spent about four years in Libya but I was deported. That robbery was my first attempt. We planned to collect her phone and we did,” he added.

The Commissioner of Police, Kokumo, said the suspects specialised in robbing unsuspecting passengers and had confessed to the crime.

Kokumo said, “Through intelligence-led policing, they (suspects) were established as authors of the crime. They have also confessed.

“They had an Audi 80 car, as an operational vehicle. They pretended as if they were operators to unsuspecting commuters. They picked them up and rob them of their valuables.”

See Nigerian military aircraft, other assets we gunned down in Sambisa — Boko Haram