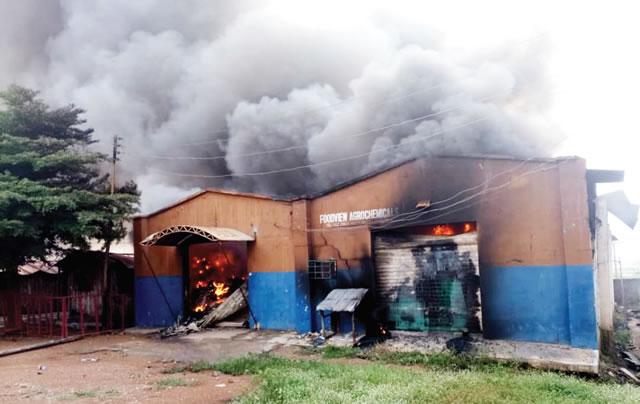 After the fire incident on Abeokuta Street in the Kaduna North Local Government Area, Kaduna State, a building was gutted by fire in the late hours of Saturday.

The house burnt by electric spark fire is located on Rafiu Close, near River Kaduna, in the Southern Kaduna metropolis, has a warehouse own by Foodview Agrochemicals, as well as a music recording company, XtraLarge Studios.

One of the landlords in the area, Mr Ahmed Misbau, who claimed to have arrived at the scene around 11.40pm, said the fire was from a spark from an electric pole.

He noted that the fire would not have escalated if engineers from the Kakuri undertaking of the Kaduna Electricity Distribution Company responded to the distressed calls put across to them.

Ahmed said, “Engineers from Kakuri division of the Kaduna Distribution Company had come about two days ago to replace a fallen electric pole.

“There was no power supply when they fixed it, but as soon as power was restored around 12am, there were sparks from the wires.

“I made several efforts to reach the engineers who usually come to disconnect power whenever we owe, but they did not take their calls. At least, if they were able to switch off power at that time, the fire would not have extended to the offices around.”

Misbau expressed displeasure over what he called the inefficiency of the state’s fire service at Tundun Nupawa.

He alleged that the officers on the ground said their trucks were not functional.

“I rushed to the Kaduna State Fire Service at Tundun Nupawa; but for more than an hour, I knocked the gate without any response. I was later told that the officials were sleeping.

“The officer that attended to me said there was no functional truck, advising that I go to the fire service at the Kaduna State University.

“The officers at KASU said they were not coming because they were waylaid while trying to reach the venue of the incident that happened on Abeokuta Street earlier in the day.”

The Creative Director, XtraLarge Studios, Mrs Sheila Roberts noted that the company lost over N20m to the fire.

She explained that the company recently bought new sets of advanced recording instruments after their office was burgled last year.

The spokesperson for the police in the state, ASP Muktar Aliyu, promised to get back as soon as he had confirmed the report. He had yet to do so as of the time of filing this story.