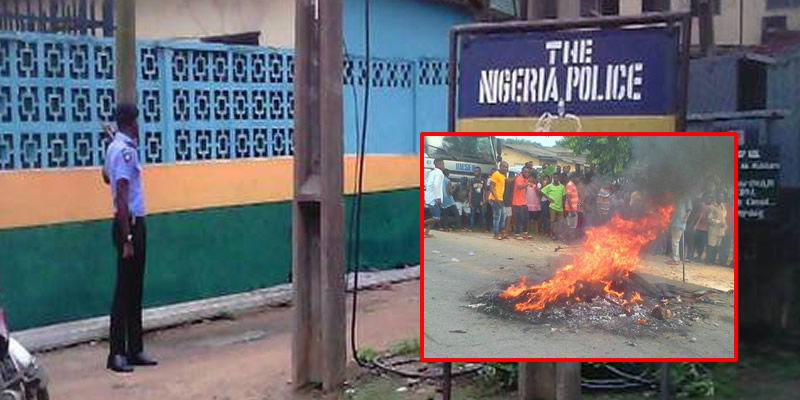 Angry mob drag robber out of Police station, burn him alive after his victim died in Cross River

A suspect killer and robber met his end yesterday at the hands of angry youths in Ugep community, Cross River state.

According to reports, the slain suspect allegedly killed a motorcyclist otherwise known as Okada rider while trying to steal his bike.

The thief while trying to steal the bike from its owner, set the rider ablaze. He first threatened the young man to release the bike keys to him, but the owner refused and fought back.

The thief fought the young man harder and allegedly emptied the small gallon of fuel he was with on the guy and set him ablaze. He took off with the bike afterwards.

The victim was found minutes after by sympathizers who took him to the hospital. The thief was later arrested by the police.

Unfortunately, the young man who was set ablaze passed away yesterday morning. So, angry youths went to the police station, brought out the thief and burnt him by the road side in front of the station as can be seen in photos below.

Desmond Elliot replies critics who blasted him for his…

Osun guber: Nothing will save you – Adeleke tells Gov. Oyetola