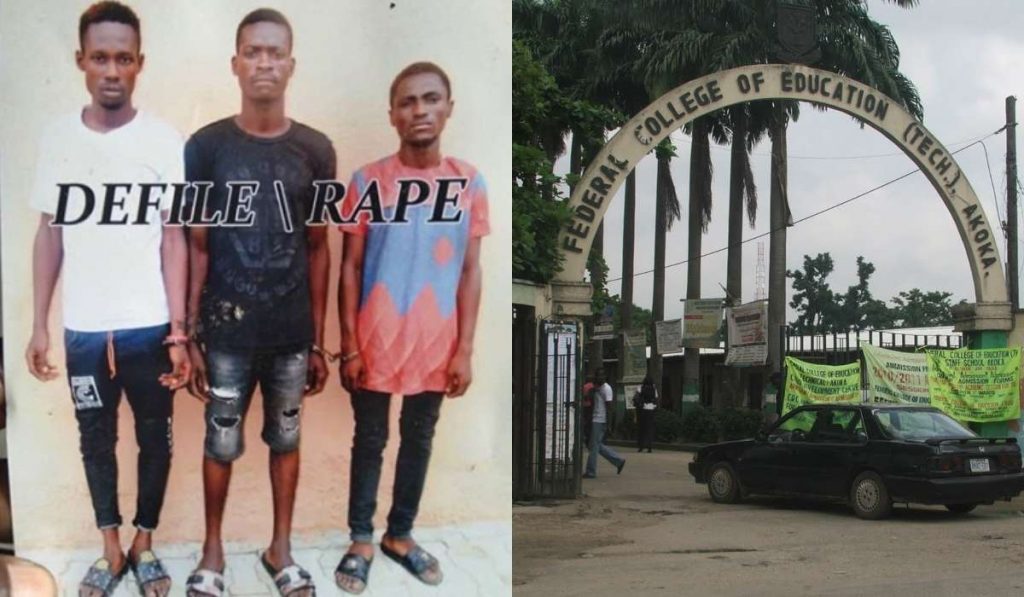 Three students of FCET Lagos have been arrested and dragged to court for gang raping a 15-year-old girl on Saturday, June 29, 2019.

A manhunt has since been launched for the fourth suspect, Ayo Segun. The girl was raped inside the Student’s Union Government treasurer’s office after she was dragged in by Segun during her visit to the institution.

The SUG treasurer, Philip, was said to be present while the victim who was in her period was being raped.

“Segun, Kolawole and Ezegbue took me inside Philip’s office at the SUG building and said they would protect me and use me as their queen if I agreed to have sex with them. Philip was there pressing his phone when I started arguing with them, but when Segun realized that I was shouting, he ordered the rest of the guys out and told me that he would kill me if I refused to have sex with him. I told him I was menstruating, but he never cared and he forcefully had sex with me.

“I thought it was over, but the others came in one after the other to have sex with me. When I tried to stop them, they threatened me. Ezegbue had sex with me but when it was Kolawole’s turn, he saw blood around my private parts and knew I was tired, so he told me to give him oral sex, which I did. When it was Philip’s turn, I pleaded with him and he said he wasn’t there to have sex with me, but said that I should lie to the others that he had sex with me if they asked” the girl said while recalling how the sad incident occurred.

The Lagos state Police spokesperson, Bala Elkana told newsmen that Phillip was released by the court while the two other suspects were remanded in Ikoyi prison.

“We have arrested the suspects involved in the case of the 15-year-old girl, who was defiled by four boys at the FCE (T), Akoka. Two of the suspects, Ezegbue Chibuzo and Oluwabanwo Kolawole, have been charged and are currently remanded in prison custody” he said.