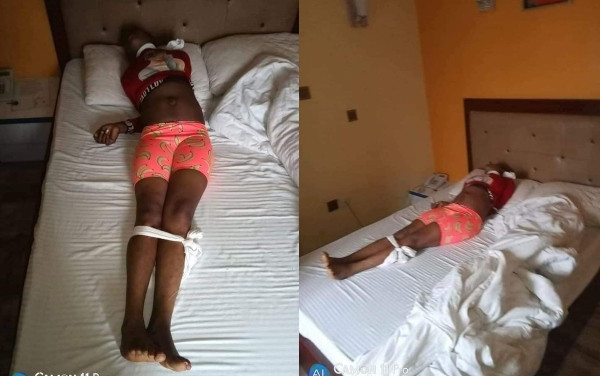 PHOTOS: Another lady killed in Port Harcourt with white handkerchief tied on her neck

After  two successful attempts, another lady has been kiled by a yet-to-be arrested serial killer at a hotel in Port Harcourt, Rivers.

The late young lady whose leg and neck was tied with a white handkerchief is said to be the third murder victim in the state who was killed in same way as others. Facebook user, Christian Anele wrote;

Another lady killed in a hotel in Port Harcourt!!

Same white cloth around the neck!!

We all need to be careful especially the ladies, Xmas Don dey reach!!!

In other news, a federal high court sitting in Port Harcourt Rivers State has vacated a forfeiture order secured by the Economic and Financial Crime Commission (EFCC) on some properties belonging to former Imo Governor Rochas Okorocha and some members of his family.