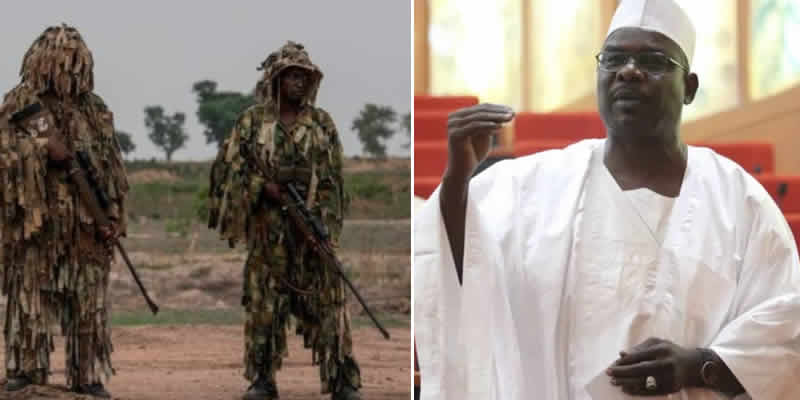 Boko Haram, Ndume and the Rest of Us

Senator Ali Ndume is a lucky man. But that luck has become torture for him so he is desperate to undo it in the hope that he can point to whatever sufferings follows as proof that karma has dealt him punishment for the bad things he has done against the land, against the rest of us. He is hooked on seeking redemption through penance for being among the leading financial backers and strategic supporters of Boko Haram terrorist group, more like the major godfather that allowed it grow from an irritant band of extremists into the bloodthirsty machine that requires the army to destroy.

The court of law might have acquitted Ndume of sponsoring Boko Haram but the real court, the court presided over by conscience has not allowed him rest. He knows that minus the technicalities that sometimes allow hardened criminals to evade justice, the arrest of the spokesman of the terrorist sect, Ali Sanda Umar Konduga, also known Al-Zawahiri, in his house is a crime that is intolerable. It is understandable if this has sent him into a manic-depressive spin.
That acquittal has damaged Ndume on two levels.

First is that he suffers the pain of not being able to satisfactorily pay for his sins, which makes him feel haunted by the sheer number of people that his associates have killed. It is this profound guilt that seems to take charge in the moments he tend to display a nationalistic zeal about crushing or defeating Boko Haram.

But on the dark side, escaping justice has made an unrepentant monster out of a man that has benefited so much from terrorism that not even a troubled conscience can make him kick the addiction of getting highs from the killings he paid for. His being re-elected as the Senator representing Borno South District has worsened his identity crisis as he now goes around with the notion that it matters not that his political empire is built out of human skeletons and watered by blood. He will have no incentives to halt his murderous pastime.

Unfortunately, irrespective of what remorse he feels in his human moment, the inordinate ambition in him has become set in using Boko Haram to haunt the rest of us. He has graduated from merely housing the spokesperson of the terrorist group to becoming its defacto mouthpiece. Why be seen with senior propaganda commanders of Boko Haram when he can himself run the propaganda while exploiting parliamentary immunity that ensures no one remembers to charge him to court as was the case when he was found out harbouring a terrorist.

That explains Ndume’s new tactics of hiding behind oversight visits and poor budgetary funding to continue the work he has being doing for Boko Haram terrorists, helping them to project the Nigerian military, indeed the entire Nigerian state in bad light. To get this job done, he quoted figures of military fatalities that strongly confirm that he got his own tallies from Boko Haram commanders, who definitely inflated figures to create the impression that they gave the Nigerian military as much bloodied nose as they have been given the present administration first came into office.

Ndume, who is handicapped enough to not know how to improve the lives of the people he claims to represents, was able to find graves and mass graves in a cemetery, making it sound as if cemeteries are meant to perform other functions other than holding human remains. Perhaps, his confusion arose from not seeing as many graves there as his boys had promised him he would find.

The Senator will never learn to the extent that the rest of us, particularly his constituents, have neglected to teach him the lessons he deserves to learn. His demotion from House Leader and rejection when he attempted to become the President of the Senate of the Federal Republic of Nigeria were befitting outcomes that had already set him on the path of rehabilitation from his obsessive pursuit of power.

But some people later fell for his blackmail and made him the chairman of Senate Committee on Army; if the intention of those that did this was to ‘give the cat custody of the fish’ then it is not working. This cat does not possess the requisite capacity for remorse to know not to eat the fish in its custody. Giving Ndume oversight of the Army in Senate has not done much to dampen his murderous pursuits. If anything, he now sees an easier way to achieve ascendancy for Boko Haram in a way that is far more effective than when he was holding secret telephone conversations with the group’s commanders or when he was providing them accommodation.

On top of that, the position has now given him the platform to play the hand we have given him against the country. He is now baiting the country, taunting the rest of us with a supposed prowess of Boko Haram against an Army we assigned with keeping us safe. It is a situation we should all be worried about for the very reason that this same man that is openly supporting Boko Haram gets to decide what funding the Army gets as it continues its war against terrorists. To the extent that he has not given up his ways, affiliation and sympathies for the group then the military will not get the legislative support it requires to function effectively.

Logic dictates that the Senate leadership should drop Ndume from the current role that gave him oversight of the Army. But even if the Senate gets around to doing this, Ndume will remain a threat to national security so long as he remains in the Senate. A country that has a pressing need to defeat terrorism cannot afford to have even one pro-terrorist lawmaker in its parliament, even when it is one facing the emotional crisis of confronting his past and ongoing romance with terrorists.

Yomi is a security expert based in Lagos.

Boko Haram: The Taming Of A Monster

Why Ndume And His Ilk Dread Peace in Borno State

Ali Ndume And His Crocodile Tears On Boko Haram