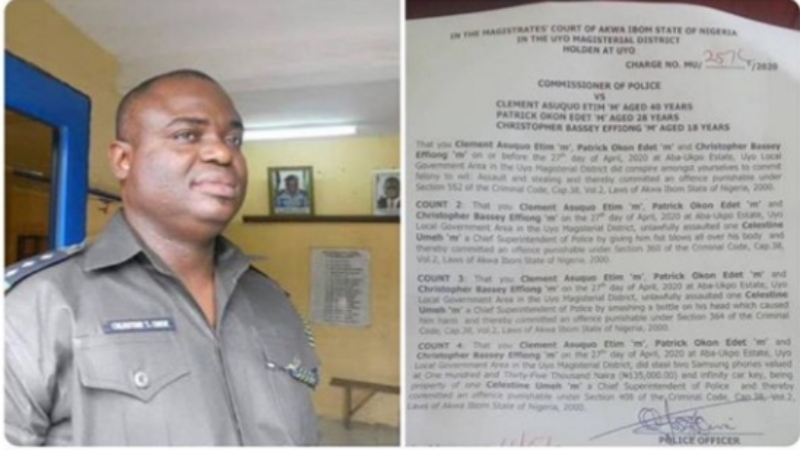 A businessman identified as Clement Asuquo Etim who allegedly caught his wife in bed with the police officer has been allegedly arrested, detained and framed-up by the officer who is a Chief Superintendent of Police identified as Celestine Umeh in Uyo.

WITHIN NIGERIA learnt that CSP Umeh had been having an amorous affair with Mrs Lawrentia Asuquo for a long time before he was caught red handed in Etim’s matrimonial bed at about 7:00pm on April 27, 2020, at Aba Ukpo Estate, Uyo.

The businessman, Etim said he was provoked on seeing CSP Umeh in bed with his wife and decided to confront him along with his cousin that came with him Calabar as a witness.

According to Etim, the senior police officer ran out with the wife and abandoned his SUV following the confrontation they had.

According to Etim, the police tortured them and falsely accused them of “assaulting” CSP Umeh and “stealing his mobile phones” at the police command.

According to SaharaReporters, Etim was detained illegally from April 27 to 30th when he was temporarily released to go and search for the keys of the SUV belonging to CSP Umeh which was abandoned at his house.

However, the cousin and home help were detained in police custody from April 27 April to May 4 when they were arraigned before a Chief Magistrate Court in Uyo on trumped-up charges of assault and stealing.

Etim said that when he was released, he decided to go to the hospital for medical checks as blood kept coming out from one side of his ear as a result of torture by the Officer-in-Charge of General Investigation, Ekene Nwosu, who used a plank to hit his ear.

The husband said when he got home, he met it empty as his wife had fled with all their properties.

In an interview with SaharaReporters, rights lawyer, Inibehe Effiong, whose law firm is representing Etim vowed to pursue the case to its logical conclusion until justice was done.