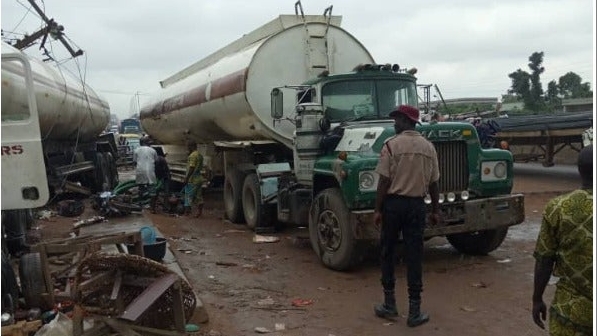 Tragedy as five vehicles were reportedly involved in two crashes along Awka-Onitsha Expressway in Anambra State.

WITHIN NIGERIA learnt that three persons were injured in both crashes.

It was further learnt that three vehicles including a tanker, a Toyota 4Runner and a Toyota Highlander were involved in the Awka crash while the other that occurred at Igbariam Junction involved a Toyota Sequia and a Mercedes Benz truck.

He said the injured victims were rushed to the hospital by the FRSC rescue team, while obstructions were cleared and normal traffic flow restored.

In a related story, WITHIN NIGERIA reported that tragedy as a middle-aged woman reportedly lost her life and many others injured in a fatal accident which occurred along Obosi road in Nkpor, Anambra state.

The tragic incident occured around 11:51am on Monday, 11 along at Obosi-Nkpor road near Elohim Oil Project Nig. Ltd.