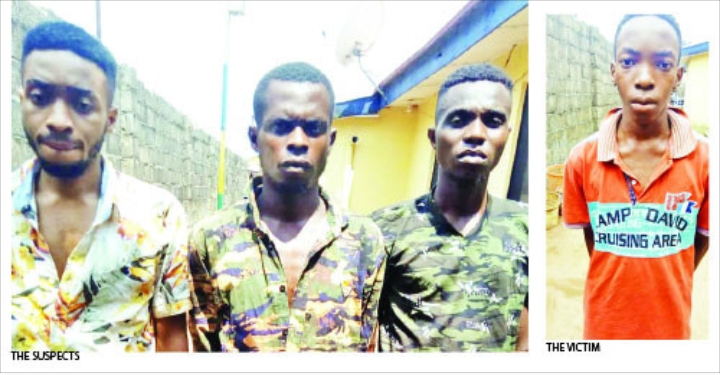 Two brothers identified as 25-year-old Fortunate Osuji and 17-year-old Praise Osuji have been arrested by operatives of Imo state police command for conniving with other members of a kidnap gang, to abduct their youngest brother, Confidence Osuji, 14, so as to extort N7 million from their grandfather.

This was disclosed by the state Commissioner of Police, Isaac Akinmoyede while parading the suspects before newsmen.

Akinmoyede said the Osuji brothers lost their parents in 2009 and were taken in by their grandfather, Chief Chukwuma Osuji, who is said to be the traditional Prime Minister of his village, Emekuku in Owerri North local government area of the state.

The state Commissioner said on June 10, 2020, at 6:30pm, the distraught grandfather visited the Anti-Kidnapping Squad in the state where he reported that one of his sons, Confidence Osuji, was kidnapped at Ezedibia Emekuku in Owerri North local government area of Imo State.

According to the police boss, the Squad’s Commander, Linus Nwaiwu (Superintendent of Police) and his operatives, through technical intelligence device, was able to track the kidnappers to their location, Amaiyii-Amate Ikeduru L.G.A, Imo State, on June 11, 2020.

With the exception of their gang leader, Nelson Dike from Obowo L.G.A but resident at St. Christiana Hospital Road, Egbu, Owerri North L.G.A and still at large, all the other gang members were arrested, besides Fortunate and his younger brother, Praise.

The members include: Bernard Ugo, native of Mbano L.G.A, Imo State but who is resident somewhere in Orji, Owerri North L.G.A. Bernard is said to be the one who threatened the grandfather to pay N7 million or else they would use Confidence for rituals.

The terrified grandfather expressed his shock in an interview with The Sun that he could not believe that his own grandchildren can hatch and execute such an evil plan.

“When I didn’t see my grandson, Confidence, who was kidnapped I immediately reported the case to the Anti-Kidnapping Squad.

The kidnappers started calling me on my phone and demanding for N7 million. They threatened that if I refused to pay the ransom, they would use the victim for ritual. I quickly went and dropped N1 million without the consent of the police. I dropped the money at their camp at Upe in Ngor-Okpala local government area of Imo State.

I was surprised that immediately I paid the money, that evening my grandson was released. I was happy. But suddenly the police came and arrested the three children. I didn’t understand until when they got into custody and Fortunate confessed that he masterminded the kidnapping with Praise. He confessed that they conspired to kidnap their younger brother with other five kidnappers. It came to me as a big shock. I didn’t believe it myself.” the distraight grandfather said.

The mastermind of the kidnap, Fortunate who is the eldest of the three brothers made some shocking revelations during interrogation.

“I attended Foundation Nursery and Primary School, from where I proceeded to Domino International Secondary School. I studied Business Administration and Management at Abia State University and graduated on October 7, 2019. Right now, I am waiting for my NYSC posting.

My father, Elvis Osuji died in 2009 at Federal Medical Centre, Owerri, while my mother, Blessing Osuji died the same year in Abia State. We are three children – myself, Praise and Confidence. We have been living with our grandparents from 2009 till date. I was the one who masterminded the kidnapping of my younger brother. We started planning it in 2017 and I had to win the heart of my younger brother, Praise, to agree with me. I later contracted my five gang members of kidnappers to execute it on June 10, 2020. I gave Confidence N200 to wait for us at a particular junction leading to Nelson’s house. I said we were going out for shopping. But it was a lie. Before that time, I had arranged with my friends. The moment he got to that junction they kidnapped him and kept him in their custody.

While my grandfather was looking for him, I feigned ignorance and played along and helped to look for him too.  Initially, the Anti-Kidnapping operatives suspected and arrested me but my grandfather vouched for me that I didn’t know anything.  I was released that day. My gang members ordered my grandfather to pay N7 million. But he pleaded and later paid N1 million. Immediately, my younger brother was released. Our leader, Nelson, who is still at large transferred N450, 000, which is my share of the ransom to my bank account.

It was on June 18, 2020 that the operatives came to the house and arrested three of us and took us into their custody. I was interrogated and I confessed that I was the one who masterminded the kidnapping and that the N450,000 sent to my account as my share is still intact. My grandfather was good to us. But we needed money to set up a barber’s  salon where we can make some personal money. I regret what I did and I want my grandfather to forgive us for what we have done.”

On the counterpart, Praise said said he regrets his actions and pleaded for forgiveness.

“I attended Foundation Primary School and went to Emekuku High School. I finished in 2019 and I am waiting for admission into the university. It was my senior brother Fortunate who masterminded the kidnapping of our younger brother, Confidence. He gave him N200 to take a transport and wait for him in one of the gang member’s house, Nelson who he didn’t know because he had not met him before. But as he was on his way, at the junction leading to the house, he was kidnapped. When police detectives arrested Fortunate, I was the one who quickly called Okechukwu on the phone to ask them to relocate to another place because the police detectives may soon catch them.”Praise said

The victim, 14-year-old Confidence, described his abduction as a terrible thing to have been conspired by his own brothers.

“It was a terrible experience as my elder brother, Fortunate, deceived me that they want to take me out for shopping. He gave me N200 to go to his friend’s house, Nelson, to wait for him. I didn’t know him in person or what he looked like. But at a junction leading to his house I was kidnapped and kept in captivity for one week. They moved me from one primary school to a forest until I was later released. My elder brother, Fortunate, didn’t tell me anything until the police came and arrested us. I attended Foundation Nursery and Primary School. I am a student of Emekuku High School. Right now, I am in SS1.” Confidence said.