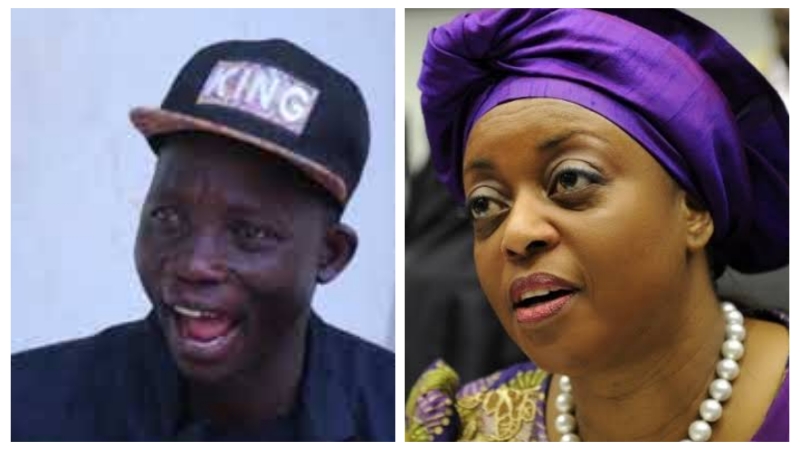 Ajani Atoribewu is a Nollywood comic actor. The way he talks and how he displays his raw talent of undiluted comedy in indigenous movies made him a toast of many. He is the proud producer of a Yoruba movie titled ‘AGBA YAHOO’. Atoribewu is not the type that enjoys in movie.

He’s either a gateman, househelp or an unserious fellow living in the village but in this movie titled ‘Agba Yahoo’, he played a different role yet his unbridled tongue still manifested. Quite sad that besides the title of the movie I would like to borrow and the unusual role he played which is similar to an alleged looter turned moralist, there are no clear similarities.

Strange things are bound to happen in Nigeria. When you thought it is finished and you have seen it all, something creepy, funny and crazy would just happen. Nigeria is a configured piece of joke where daily events no matter how sad and tragic they can be sometimes are comedy pills to people who have humors.

Whenever a big and popular masquerade alleges that teenagers who use masks scare people away, I see it not only as a joke but as a betrayal of trust in the mask world. A looter or thief who walks freely due to complexity of crime, being a beneficiary of weak judicial system would also thank God for sucessful operation even shares a wonderful testimony on the pulpit if allowed.

Just like the character Ajani Atoribewu played in his movie “Agba Yahoo”, we all know the character to be a Yahoo boy by the virtue of dressings and what he does yet he boasted that ‘Agba Yahoo ni mi’. When I read the lamentation of Diezani Madueke that yahoo boys have become role models of young people, I could not take off my mind away from the movie “Agba Yahoo” and concluded that she (Diezani) has probably forgotten who she is. She is a mentor, role model and a living legend to these ‘yahoo and benefit boys’. They saw in her (Diezani) sterling qualities such as cruelty and greed that one must possess to be a successful looter. I honestly believe that as worst as the situation might be, Diezani lacks the moral rights to be a critic of the same lifestyle she exemplified without apology.

The likes of Diezani milked the nation dry and embezzled public funds meant for the development of the country. Funds that would have been used to build roads, hospitals and grants for companies either large or small to lobby investors, leading to provision of jobs for graduates were looted by a group of people. I have seen a couple of demeaning and heart-breaking videos tend to mock hardwork, diligence and being legally responsible following the reopening of schools for exit classes. These videos even as skits represent the sorry state of the nation, the gradual washing-away of our values as a society and loss of interest in education, a vehicle of growth.

Some years ago, only young adults who are probably children of the rich and politicians alongside their careless parents flout wealth but nowadays school kids involve in a lot of illegal activities such as online scams, fraud and robbery to fit in such lifestyles. Teenagers in other nations take advantage of technology to sharpen their skills in artificial intelligence and use internet privileges to develop themselves but reverse is the case here as majority of Nigeria youths now engage in fraud and prostitution.

We shifted our priority as a nation, reduced the values and gains placed on education and hardwork. Students now go to colleges, learn and later join the colony of unemployed ones after graduation. They trek long distances to look for non-available jobs while people who did not go to schools or learn any artisan works ride expensive vehicles and live comfortably because they engage in illegalities such as fraud and crimes. Now teenagers have lost the passion for education, honesty and hardwork because they live in a nation that does not prioritise these cores values of growth.

Besides greed and vagrant thought of wealth, poor leadership brought us to our knees as a nation. They (politicians) milked the nation dry without pity, compassion and sympathy. Those who were opportuned to make things right also embezzled public funds for their families and unborn generations. They (politicians) give public funds to thugs, reward dishonesty, violence and made life miserable for the educated ones.

Permit me to take you through a short narration of how Alision Diezani bled Nigeria:

Return looted funds, repent and then allow the law to take its course. We all will be glad to listen to your talks in prison especially how you allowed greed to reshape your path. This would be a clear message to the ‘benefit and yahoo boys’ than the ‘Agba Yahoo’ allegations.

Let us meet in the next edition.

Apagunpote Olayimika Chocomilo is a columist at WITHIN NIGERIA. He can be contacted via [email protected]