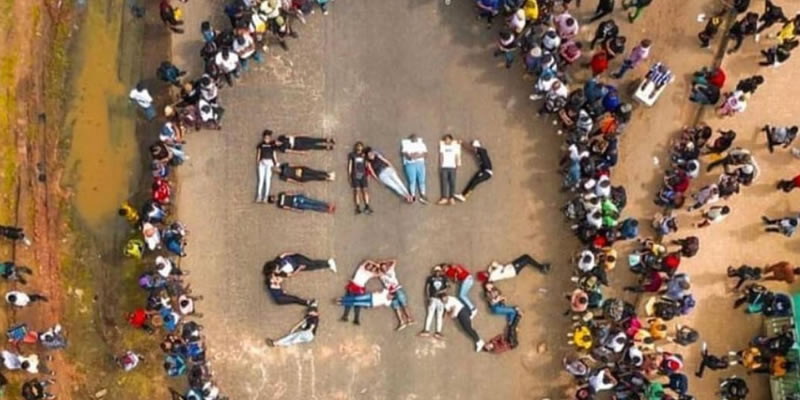 We may just be nearing the end in the head scratching search for the financiers of the gourmet food being served on a daily basis to the #EndSARS protesters. The protesters have persisted on staying on the streets even after government has agreed to meet their five-point demand for reforming the police. The offer of food and other freebies, like free of charge repair of vehicles damaged at the protests and the social attraction of women and exchange of phone numbers, has been a magnet for some youth, who said they are participating in the protest as much as for the food as the principle of demanding change.

However, with the protesters vowing to remain on the streets, and growing belligerent, there is increasing suspicion that there are indeed powerful vested interests teleguiding the protests. They were behind the scene at the backend, particularly with the inane claim that the protest has no leaders – never mind that a five-point demand was articulated and presented to government, possibly by a ghost.

But on Sunday, Mr. David Oyedepo, presiding Bishop of the Living Faith Church, in keeping with his tradition of toxically abusing the sanctity of the pulpit, exposed himself as potentially being one of the financiers and sponsor of the protests. In a Trumpesque rant during the second service to his captive audience, he carried on about how the administration of President Muhammadu Buhari is the equivalent of the biblical evil king.

On the surface, the Bishop appears to be another senior concerned Nigerian citizen expressing displeasure over the state of affairs. But a deep dig shows that he is rather an instigator of violence against the government of the day, total collapse of law and order that could lead to total anarchy. There is no doubt the bishop has motive, means and malicious intent to tarnish the reputation of the present government and disintegration of Nigeria obviously for selfish reasons.

A few things stand out on which Oyedepo has clearly indicated his anger at the government’s actions as they directly affect his business empire. First was the stoppage of free parking of private jets that the Bishop and his associates had enjoyed under the previous administration, whose anti-corruption drive also caused the amount of money that Oyedepo’s church members are able to remit as planting of seeds, donations, offerings, tithes, pledges and sundry funds payable to his church. Another source of his unjustified anger is the requirement to comply with Financial Reporting Regulation that would have tenured the leadership of churches if its implementation where not stood down. The amended Company and Allied Matters Act (CAMA), which President Muhammadu Buhari signed into law was particularly distressing for the ostentatious capitalist Bishop, who did not hide his disdain and anger at the law that could impose a governing board to ensure financial transparency in the running of churches as charities.

It must not be forgotten that Bishop Oyedepo tried to mislead Nigerians that COVID-19 was caused by non-existent 5G telecommunications facilities. When he was proved wrong, he rose against the COVID-19 control protocol that required places of worship to shut down for a duration of time. In the weeks that churches and mosques were shut down, the earnings of Winners’ Chapel took a bad hit. His inability to corral people into the expansive halls of his church and threaten them with the horrors of hell meant that they were not blackmailed into parting with money they do not have; of course as a savvy businessman, he was quick to embrace the digital platform and virtual church service but expectations that people will donate digitally were woefully shattered. Indeed, the Bishop became distraught and desperate.

On his part, the Senior Pastor of Dunamis International Gospel Centre, Dr. Paul Enenche, contributed to corralling #EndSARS protesters into deviating from the objective of pursuing reform of the police to asking for broader reforms. Possibly, unable to tinker with psyche of protesters from the background, he delivered a talk on “The Way of Peace,” which video was highly circulated in which he egged on protesters to oppose massive injustice, unfairness and lack of equity, oppression, suppression and subjugation of one people by another, nepotism, tribalism, regionalism, religionism and every form of such prejudice deprivation, poverty and hunger.

One would wonder what kind of doctor Enenche would have been if he were to be in full practice. He possibly would have been the type that will attempt carrying out a radical surgery to remove cancer that has spread all over a patient’s body instead of first dealing with knife stab wound that brought the patient into the accident and emergency ward, for that is what the #EndSARS protest can be likened to. The pressing national emergency at this point is to deal with the issue of right abuses by the police and then confront the other undesirable issues in the land in successive layers.

For Pastor Folu Adeboye, wife of the General Overseer of the Redeemed Christian Church of God, the strategy for keeping the #EndSARS protest on the streets is to ensure that protesters don’t get famished, so she delivered three truckloads of food and water to them. Hubby, Pastor Enoch Adeboye previously voiced support for the protests when he wrote on his Instagram page that “Our daughters will not be able to prophesy, and young men will not see visions if we don’t keep them alive. I support the youths in this peaceful protest as they “speak up” to #EndPoliceBrutality #EndSARS #ENDSWAT”.

It is interesting that these expressions of support, and, in Oyedepo’s case, open incitement, are in spite of the clear signs that the protests have turned violent with protesters chanting anti-government, anti-Buhari and pro-violence slogans. So far, there were over 12 persons dead. If things degenerate further, the clergymen have prepared alibis for themselves by rounding off their inciting acts and comments with the lame appeal to the protesters to be orderly, peaceful and law abiding. It will be interesting to hear from them how young people will remain law abiding when induced to wholesomely hate the leadership of their country by people in the kind of position of trust that the clergy occupied.

Knowing that every single thing being protested today predates President Buhari’s administration, one wonders why these clergymen did not find it pertinent to incite the youth in the manner they are doing now. Could it be that the excesses of SARS just surfaced or could it be that corruption was oiling their businesses so effectively then that they did not notice the anomalous conditions under which we live in Nigeria?

If religion is described as the opium of the masses, then people were weaned of their addiction to the sermons of commercial clergymen in weeks of the COVID-19 induced lockdown. A lot of them simply did not return for their fix after the lockdown was lifted, which has left these businessmen in dire financial straight as revenue keep dwindling. They also lost their hold on congregant since the lockdown period exposed the truth – people did not die for not given to the extortionist activities of their spiritual fathers in the period they did not show up to mark the register.

These clergymen are happy that the youths are protesting and the gloating tone in their sermons suggest their joy at the prospect that the end of President Buhari’s government is near. Unfortunately, they fail to understand that if President Muhammadu Buhari goes down in the manner they have orchestrated then, the country will be in flames for the next 50 years, there are people who will ensure that the puppet masters of these protesters become first set of casualties by obliterating their business centres and converting their worship centres to warehouses and declaring an end to theocratic interference and religion in Nigeria.

A timely counsel for these businessmen-clergy is to play the role expected of them. Their religious centres should run as real charities, with the bulk of the money they extort being spent on genuinely addressing human suffering, and without the pointless political posturing. They should allow the police reforms agreed by all involved to go ahead so that it would be concluded in time.

The other matters, like corruption and ethno-religious schism, they have introduced to the protest will take time and deeper efforts to fight. On the part of the clergymen, it requires that they stop accepting stolen money from their members who are in government and they must also limit their get rich-by-any-means sermons, popularly called prosperity gospel. As for the government, it is time for those in charge to fully deliver on the constitutional expectation that Nigeria is secular state. The undeserve waivers they usually give to these religious businessmen have to stop with the full powers of the Financial Reporting Council and CAMA unleashed on them. After all, they have proven that they are part of the problem.