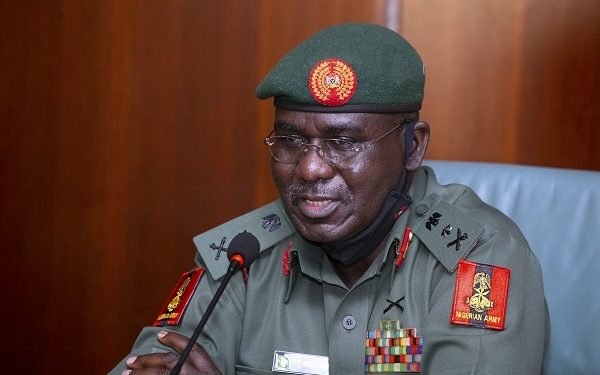 Time is no respecter of persons. It is the only vehicle of existence which waits for no one on its voyage. On a day like yesterday, November 24, a Nigerian was born to a peasant family in an obscure community called Buratai village in Biu town of present day, Borno state, in Nigeria’s Northeast.

He was named Tukur Yusuf Buratai. No comets were seen on the day of his birth neither did kings nor queens warm his arrival on earth. Perhaps, a handful of neighbours heard the shrill cry of a new born baby and rushed to fete the mother for a successful passage through the pains of pregnancy and safe delivery.

In presumptive accuracy, I dare say, within the same Buratai village, others may have heard about the birth of baby Tukur Yusuf, but were aloof and more concerned with chasing the complications of every day survival. But it never changed anything anyway.

God Almighty sealed the destiny of baby Tukur Yusuf from conception and he was in the world for a noble mission. And @60, he has vigorously pursued this dream of redeemer of humanity; conquered all repressive vagaries and odds to ingrain his identity in history as a liberator of troubled humanity; a professional combatant soldier; dogged fighter, warrior, Nigeria’s redeemer warmonger of global acclaim and an extraordinary Army General of repute.

Even now, most parts of the expansive landmass of Borno state are still rural, adored only with the rustic emblems of countryside. So, I imagined and tried to picture how Borno would have been some 60 years back and, images of a dark void filled my heart. Certainly, it was a forgotten enclave, coloured partly by lush greenish grasslands or vegetations and resourceful swamps which snaked into deserts, forests and caves; where birds, reptiles and wild animals were the only worthy companions of home sapiens.

But it is the place whice bears the ancestral roots of Lt. Gen. Tukur Yusuf Buratai, Nigeria’s Chief of Army Staff (COAS) and the indomitable chief armour bearer of the counter-insurgency operations. Great men and women or what others aptly capture as salvationists of enslaved humanity globally, usually come from such nondescript backgrounds and unassuming homesteads or hamlets. But they trudge the world mightily like dinosaurs. They deposit unimaginable imprints on the sands of time.

The prolific novelist and literalist, Cyprian Ekwensi’s “African Night’s Entertainment,” of children’s series was my uncle’s favorite and classic. He loved African proverbs and was fond of the adage; “looking at a king’s mouth, one would think he never soaked from his mother breast.”

Therefore, when a friend told me Gen. Buratai clocked 60 years of age yesterday, memories of the wits of Uncle Aliyu came back to me. His teachings and the passion he had on African cultural endowments resonated very pungently in me. It compelled me to reminisce his favourite proverb; “Looking at a king’s mouth, one would think, he never soaked from his mother’s breast.”

When I ruminated on the rewarding, enviable and outstanding military exploits of Gen. Buratai, it was hard for me to believe, like most Nigerians, that he came from such an ordinary background. The portrait of Gen. Buratai’s life today sharply contrasts with the reality of his ancestry.

Gen. Buratai was not born into an affluent family or a bubbling city. Fathered by Papa Yusufu Buratai, a World War II veteran of the Royal West African Frontier Force (RWAFF), the younger Buratai toiled and sweated to make his relevance in service of humanity.

In Gen. Buratai’s formative years, life was a stiff competition between tradition and modernity, as expressed by western education and values. But born with a destiny, imbued in him as a zeal to pursue a cause, Gen. Buratai was fired by it to embrace western education. He started his elementary education in the countryside and later, migrated to Nigeria’s mini-cities in search of knowledge.

At every stage of the quest for knowledge, Gen. Buratai proved his innate talents and brilliance until he landed at the famous Nigerian Defence Academy, (NDA), Kaduna. He was commissioned into the Nigerian Army in 1983.

Only then it became clear to all discerning eyes that Gen. Buratai had settled for a destiny and a career for Military service to his fatherland and humanity. It was his emulation of the warrior spirit in his paternity or lineage, as abundantly expressed by the patriarch of the Buratais.

And looking at Gen. Buratai’s military service today, his progress is incredible. While in service Gen. Buratai exposed himself to further training as infantry combatant in the best military institutions in Nigeria and abroad. He has held countless command, administrative and instructional positions before his appointment as Nigeria’s COAS.

And @60, Gen. Buratai has excelled as a soldier, military leader, administrator, war veteran, tactician and strategist. He is a poet, military historian, philosopher and a distinguished alumnus of the prestigious Ahmadu Bello University (ABU) Zaria, with a two Master’s degree.

Gen. Buratai has been decorated with numerous garlands and medals within and outside Nigeria for his excellence, bravery and gallantry. President Muhammadu Buhari did not make a mistake by appointing Gen. Buratai as the COAS and anointing him leader of the counter-insurgency operations in 2015. It was the most auspicious and difficult period of the nation’s tumultuous history of insecurities.

Before Gen. Buratai’s arrival on the scene, Boko Haram insurgents particularly had gone amok and berserk in Nigeria. The insurgents took almost total control of the entire Northeast region and sustained a disturbing stranglehold on the whole of the Northern region, Abuja was not spared its fury. The religious militants launched relentless bloody campaigns recklessly to forcefully establish an Islamic State in Nigeria.

Boko Haram had gained substantial grounds in the Northeastern states of Borno, Yobe and Adamawa. Insurgents effectively annexed and colonized at least 17 LGAs (others peg the number at 21), established a Caliphate headquarters at Gwoza and a subsidiary administrative unit in Baga, all in Borno state. Insurgents made mince meat of troops at the warfront, who often shirked in the heat of enemy attacks or mutinied endlessly.

Boko Haram gruesomely murdered Nigerians in tens of thousands, indulged in massive abductions, committed acts of arson and displaced millions of locals from their communities. Peace was murdered in Nigeria and the fire of Boko Haram was replicated in similar, if not, greater depth by armed bandits in the Northwest. Violent militancy in the Niger Delta and bile secessionists agitations conspired to cripple Nigeria, Africa’s most populous nation.

But suddenly, Gen. Buratai sauntered on the stage to command the battles against anti-terrorism and insurrections. And the narrative changed with superfluous speed in rewarding victories against Boko Haram. In spite of their multiplicity into more sects such as Islamic West Africa Province (ISWAP), Gen. Buratai has boldly proved his mettle as a solder, commander, workaholic and warmonger in whom we are all well pleased.

Boko Haram’s factional leader, Abubakar Shekau and his soulmate, Musab Al Barnewi have bemoaned several times, the frustrating pains Gen. Buratai has inflicted on terrorists in the battlefield. Shekau has repeatedly moaned frustrations with the insurgency war wedged on Nigeria because the Army Chief has refused to give them a chance to deface Nigeria with evil or triumph over country. He deserves kudos on this special day of his life.

Behold, this great solder, leader and military strategist has turned 60 years of age. But he had no chance to celebrate this special day of his life with friends and family. Gen. Buratai could not afford the luxury of a birthday toast with his lovely children or throw lavish parties in posh places in celebration of this unique day, like the rest of us do on such days.He spent the whole day in the trenches and caves of the Northeast and forests of the Northwest, personally leading the counter-insurgency operations from the warfront for the rest of us to sleep in bliss and peace. Oh, the life of a soldier is not enviable. I am one of the many Nigerians who would have loved to have had a birthday toast with him on such a special day; but the circumstances would not permit it.

So, I decided to fill a void in my heart for a deprived birthday toast with Gen. Buratai with this tribute to a “Peoples General;” “Boko Nemesis;” “redeemer warmonger;” “the conqueror of merchants of swords” and Nigeria’s most outstanding numero uno soldier and celebrated Army General of his time. This is my token birthday toast with you @60 and may Almighty God continue to shield you in the trenches from our enemies as we wish you the age of methuselah.

Onmeje wrote this article from the United Kingdom.