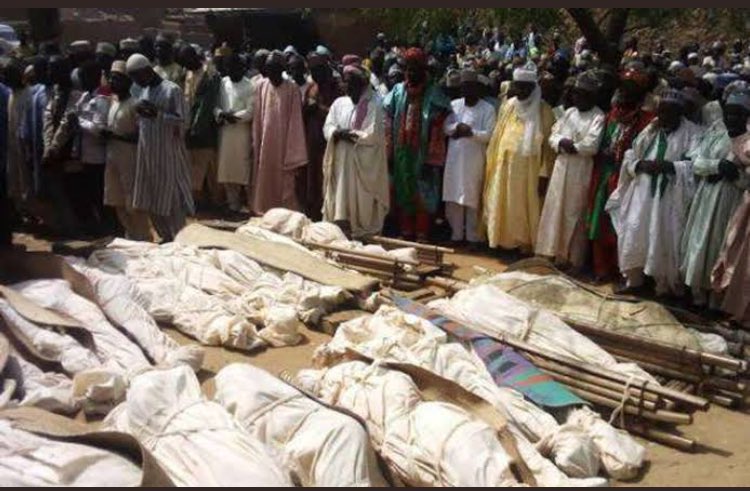 Survivors of the massacre that unfolded in the rice fields of northeastern Nigeria on Saturday, have recounted the horrifying incident.

Seventy-six people died, according to the authorities. Many were impoverished farm workers who were tied up before their throats were slit.

A traumatised survivor aged 24, who can be called Abdul, said the murderers posed as labourers who had come to the fields in Koshobe, Borno state, to do seasonal work.

“I ran errands for them, getting them food and washing their plates,” said Abdul, who came with hundreds of others from Kebbi, a poor region 1,000 kilometres (600 miles) away.

Around 40 jihadists were involved in the massacre, according to survivors.

In the early afternoon of Saturday, they took out their guns and herded about 60 workers in front of an abandoned building, said Abdul.

“They separated the aged (from) the rest of us and said we should take turns to pay homage to their leader who was in the house,” he said.

“But it was only a ploy because whoever went in never came out.”

“At a point one of the insurgents guarding us told us that we were being slaughtered and asked us to flee,” he said. “I was one of the few lucky ones.”

As he fled, he witnessed the unbearable: “The assailants then went on a killing spree, seizing workers on rice fields, tying them up and slitting their throats.”

It appears that the jihadists also targeted workers who were from the nearby village of Zabarmari, even though the village had a protection deal with Boko Haram.

Bello Muhammad’s younger brother Ali, aged 20, was among those killed.

“They asked who among them was from Zabarmari and my brother immediately stepped forward and was asked to enter the house where he was slaughtered,” he said, recounting what was said to him by a witness.

“There was an agreement that the jihadists would never attack Zabarmari residents, which was why Ali was quick to step forward, thinking he would be spared.”

Forty-three corpses were found in the building, and 33 have been found in the rice fields. More, it is feared, have yet to be discovered.

“It is a tiring job because regular vehicles can’t move in the difficult terrain because they will definitely get stuck,” said Abdullahi Umar, a member of the search team.

He described the search as “dangerous” because Boko Haram operates in the area, which has footpaths that link to its haven in the Sambisa forest.

At least 36,000 people have been killed and two million displaced since the jihadists launched their bloody campaign in northeast Nigeria in 2009.

The UN, in an early account of the latest massacre, said that the assailants arrived by motorbike, and gave a preliminary death toll, since retracted of 110.

It has not been ruled out that several groups may have taken part.

On Tuesday, Boko Haram said it was “responsible for what happened around Maiduguri in recent days… especially in Zabarmari.”

The killing, it said, was in retaliation for the death of one of its members who had been arrested by villagers and handed over to the authorities.