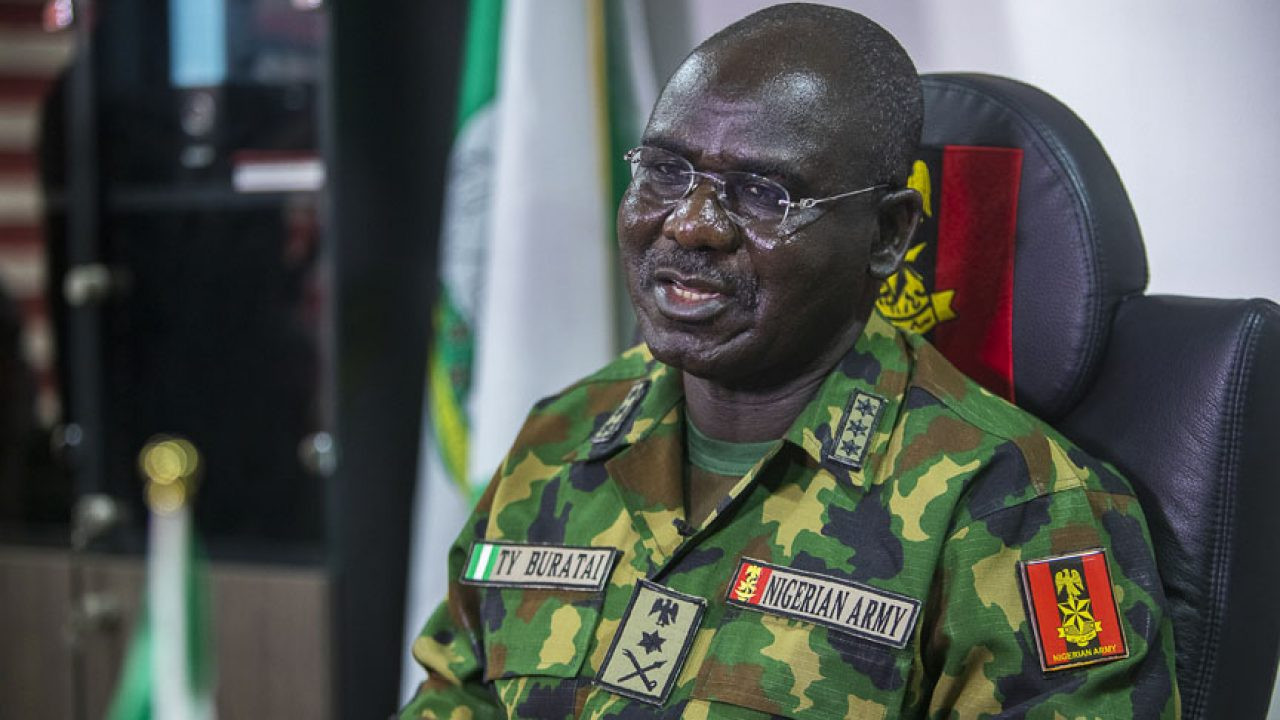 It will be twisted logic and misplaced sense of judgment of the exact reality to assert that the Nigerian Army is having good times in infrastructural provisions under the supervision of its current Chief of Army Staff (COAS) Lt. Gen. Tukur Yusuf Buratai. It is more appropriate to say, the Nigerian Army has landed in its best of times on infrastructural provisions and exceptional welfare packages under the guardianship of the COAS, Gen. Buratai.

Before the reality of the leadership of Nigeria by President Muhammadu Buhari, discerning Nigerians knew several other salient reasons accounted for the persistent open anger expressed by soldiers in the warfront. The persistent mutinous actions by troops at the frontlines fighting Boko Haram was partly attributable to the absolute neglect and defacement of the infrastructural image and welfare of officers and soldiers.

Soldiers experienced and endured dilapidated Barracks, acute shortage of office and residential accommodations, poor state of Army Guest Houses and camps throughout the country. Some Army Barracks had not tested any flavour of renovation or rehabilitation since Nigeria’s first post-independence era Defence Minister, Alhaji Muhammadu Ribadu built the structures in the early sixties. History has recorded him as a leader who massively built new Barracks and renovated old ones.

Like Ribadu; Gen. Buratai has carved an enviable niche for himself in the new Millennium as an Army Chief who has generously built new Barracks for the Army and massively renovated old ones in virtually all parts of the country. African proverb says, a chic which would grow into a cock is known the very it is hatched.

So, Gen. Buratai started exuding the signs of a genuine leader, reformer, a positive minded personality and charismatic goal-getter on all fronts the first day he assumed office as Nigeria’s COAS. He toured Army formations and units across the country; bemoaned the competitively dilapidated state of Army Barracks and facilities, whilst he silently took notes on the urgent interventions each of the Barracks required to transform into a habitable dwelling place for soldiers.

The Army boss believes in the philosophy that a soldier deserves the best in peacetime because he faces death every minute in wartimes. Though, Gen. Buratai sauntered unto the leadership of the Nigerian Army at the time Nigeria was plunged into economic crunch. But the reality of meagre budgetary votes and insufficient funding of the Army to date did not deter Gen. Buratai from putting smiles on the faces of officers and soldiers.

With a supportive Commander-In-Chief, President Buhari, Gen. Buratai has propelled the Nigerian Army on an unprecedented and incredible structural expansion and physical development in the last five years. He corrected and normalized what appeared to have been an intentionally institutionalized structural decay, deformities and degeneration of almost three decades in barely five years of his leadership.

And the real good news is that the Army Chief has not felt he has done enough to assuage the depravities his colleagues’ yet. Therefore, he hungers to accomplish more in impactful legacies for the Nigerian Army. And to properly uplift Army personnel welfare, Gen, Buratai has starched an extra mile to partner with private estate developers to berth his vision of normalizing the accommodation deficits, which hitherto plagued the Nigerian Army for decades.

Reputed as a focused leader, with a functional mind, Gen. Buratai has conceptualized and delivered his development agenda for the Nigerian Army under the broad divisions of policy frameworks of NA Property Limited and NA Welfare Limited by Guarantee, Army Post-Service Housing Scheme and Nigeria Army Farm and Ranches among a motley of others.

Gen. Buratai is a man of taste and elegance. And one unique feature of Buratai’s touch on structural transformation of the Army is that he has phased out the Lord Lugard’s structures which dotted Army formations/ Barracks and replaced them with modern architectural masterpieces. And the new buildings are also an aesthetic consummation of the dynamism of architecture’s latest wonders of awful edifices. They are a sight to behold everywhere. He replaced obsolete amenities, facilities and equipment in the Army Barracks and units with state-of-the art latest models.

The establishment of two new Army Divisions by Gen. Buratai in conformity with the Presidential directive on new Nigerian Army Order of Battle (ORBAT) is not the most cheering news. But it is the pleasant shock that the new Nigerian Army Divisions 6 and 8 in Port Harcourt, Rivers state and Monguno, Borno state are fully operationalized. And it is because the Army Chief worked assiduously to get all the needed structures ready within record time.

Gen. Buratia has replicated the same portrait in the new and novel Nigerian Army University Biu (NAUB); the first Nigerian Army War College, the Nigerian Army Aviation School as well as the renovation and construction of new buildings at the Nigerian Army School of Artillery in Kachia, Kaduna State. He renovated and modernized the Office of the Military Secretary at the Army Headquarters Abuja; built and equipped the Nigerian Army Resource Centre (NARC) Abuja, which is serving the dual purpose of an expansive office accommodation and modern resource venue for workshops and seminars for soldiers.

Still in Abuja, the fanciful modern structures at the Muhammadu Buhari Cantonment at Giri, consisting of new 150 flats of accommodation in the Barracks accommodating 150 families of officers and soldiers is legendary in the recent history of the Nigerian Army. Okene in Kogi State has also hosted a new Army Forward Operations Base’s (FOB), and military barracks.

The testimony also reflected at the newly built headquarters of the 331 Artillery Tactical Forward Operation Base (FOB) in Buratai in Biu LGA of Borno state. The structural development inclination of Gen. Buratai started quite early in his leadership. By 2016, the renovation of 10 blocks of 30 flats each at the Maxwell Khobe Cantonment, Jos was completed.

The development streak descended on the 3 Brigade Kano, where new blocks of multiple flats of accommodation for soldiers in the Bukavu Barracks, Kano have been completed. It amazingly displays two newly constructed blocks of 24 flats each and five renovated blocks of 12 flats each. Still under Gen. Buratai’s leadership, the Nigerian Army renovated and remodeled accommodation for 120 soldiers in Ribabu Cantonment and Dalet Barracks, under 1 Division (1 DIV) Nigerian Army, Kaduna, comprising of flashy 120 flats.

And the Nigerian Army’s partnership with Betonic West Limited has launched a N7.5 billion Army Post-Service Housing project in Otukpo and Ohimini LGAs of Benue state. The same rewarding partnership with Belemaoil Producing Limited, has earned the Army a 3-story building containing 30 flats at the 16 Brigade Headquarters, Camp Buratai, Yenagoa, Bayelsa State. Gen. Buratai has established a dozen Army Forward Operations Bases (FOBs) throughout Nigeria with all the necessary facilities.

Quite impactfully too, the leadership of the Nigerian Army by Gen. Buratai has rehabilitated and re-equipped all existing Army hospitals, medical facilities and Referral hospitals. The aim is to give the best medical care to “Wounded Soldiers in Action” (WIA) as wels of families of Army personnel. He has finalized this vision by building a new Referral Hospitals, located in Maiduguri, Borno state.

And work is earnestly in progress at the new Army Referral Hospital, located in Abakaliki, Ebony state to make healthcare delivery more accessible and affordable to soldiers, their families and even members of the host communities. Gen. Buratai is indeed, the Nigerian Army’s Mr. Infrastructure. Even at the risk of flattery, it is more accurate to say the Nigerian has never experienced these robust structural developments and expansions in recent times as spearheaded by Gen. Buratai. It is precisely, the best of times for the Nigerian Army.

Therefore, after Alhaji Muhammadu Ribadu, no COAS since post -independence Nigeria has rapaciously upgraded structures of the Nigerian Army like Gen. Buratai. He has evidently done so much to better the lot of his colleagues more than anyone else.

Gen. Buratai represents the changing face of Nigerian Army’s structural beauty and development revolution in Nigeria. Nigerian Army missed a leader in Gen. Buratai at the time Nigeria bubbled in excess wealth, but with no committed leaders. Had Gen. Buratai climbed the ladder of leadership at such glorious times, Nigerian Army would have been a perfect example of another El Dorado in Nigeria.