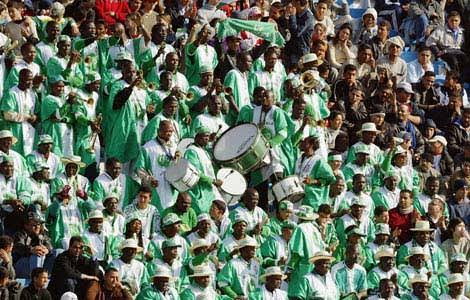 The Nigeria Football Supporters Club (NFSC), is set to mobilise no fewer than 5,000 supporters ahead of the Super Eagles FIFA World Cup playoff against Ghana.

The News Agency of Nigeria (NAN) reports that Nigeria and Ghana are scheduled to slug it out over a two-legged encounter in March for a world cup slot in Qatar.

Speaking with NAN on Tuesday, National Chairman of the Nigeria Football Supporters Club (NFSC) Samuel Ikpea stated that the mobilisation of its members to support and cheer the Super Eagles was a reaffirmation and continuation of the age-long commitments of NFSC.

The chairman, however, appealed to well-meaning Nigerians such as Femi Otedela, Aliko Dangote and Mike Adenuga among others, to come to the aid of the NFSC in its quest to achieve its objective.

“The NFSC which is Nigeria’s foremost fans club of over 66 years have continued to contribute its quota to the development and fortunes of Nigerian football.

“Our goal is to achieve what we call ‘Operation beat Black Stars back-to-back’ but in order to achieve this goal, we need a lot of funds to enable us mobiise no fewer than 5,000 supporters for this all important qualifier.

“We therefore, solicit the support of all well-meaning Nigerians as well as both private and corporate organisations to come to our aid in this regard.

“The Super Eagles must not be intimidated at Accra,” he said.

Ikpea whose vibrant team just returned from the Africa Cup of Nations (AFCON) in Cameroon, noted that the current Eagles had all it takes to dim the light of the Ghana’s Black Stars from shining.

“Feelers reaching me from Ghana indicates severe jitters, not just from their supporters but also in the camp of the Black Stars.

“Although, from history, both West African teams have been rivals, the current form of the Eagles only need to be strengthened with additional legs and technical know-how to do the damage,” he said.

However, he advised the handlers of the Super Eagles not to allow the poor performance of the Black Stars at the just concluded AFCON influence their approach to the two-legged encounter.

Ikpea also urged Nigerians to put behind them the disappointment of the Super Eagles ouster from the AFCON at the second round in Cameroon.

“We all as Nigerians were heartbroken with the Super Eagles’ exit from the 2021 AFCON in Cameroon, especially after putting up a good performance at the group stage.

“Our expectations were really high that the team would go far and the NFSC indeed gave the boys all the needed support but unfortunately,E it wasn’t to be.

“However, judging by the Eagles’ current form, all that Nigerian football followers need to do at this crucial stage is to forget about the disappointment at the AFCON and forge ahead.

“We must rally round the team once again and lend our maximum support during both encounters,” he said.

Nigeria and Ghana will face off in the first leg of the FIFA World Cup Qatar 2022 play-off leg in a potentially–explosive encounter inside the Cape Coast Stadium on March 24.

Both teams will then lock horns in a pitched battle in the reverse fixture at the Moshood Abiola National Stadium, Abuja on March 27.

NAN also reports that the final leg encounter will be the 59th clash at senior level between both West African giants in a chequered 71 –year rivalry.

It will also be the first game involving the Super Eagles at the country’s premium sporting arena since the Eagles defeated Sudan’s Falcons of Jediane 3-1 in an AFCON qualifying match on Oct. 15, 2014.