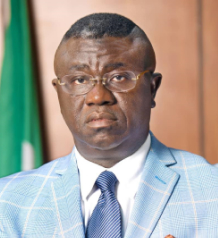 Agba said this at the inauguration of a Report on “Closing Gaps, Increasing Opportunities: A Diagnostic on Women’s Economic Economics empowerment ”, by the Nigeria Gender Innovation Lab of the World Bank in Abuja on Tuesday.

Reports that the report was put together in partnership with the Ministry of Finance, Budget and National Planning.

He said the diagnostic aims to measure economic gender gaps, ascertain the drivers of the gender gaps, and identify evidence-backed and innovative policies solutions to close gender gaps nationally.

The minister said that constraints faced by women and girls in Nigeria drive gender gaps across sectors and must be addressed to empower women economically, close gender gaps, and increase economic growth.

He, however, said to effectively address these gaps, it was important to first understand the size of the gaps as well as their underlying drivers.

According to him, results from the gender diagnostic report highlight the vast gender gaps in earnings across economic sectors in Nigeria.

“Women wage employees earn 22 per cent less than male employees. Such gender gaps are immensely costly, both to women and to Nigeria as a whole”.

He said a simple assessment suggested that the gaps in agricultural productivity, business sales, and hourly wages in Nigeria could add up to as much as 22.9 billion dollars equivalent to roughly 5.8 per cent of overall Gross Domestic Product (GDP).

Agba said that these findings were not indicative of women’s ability as farmers, entrepreneurs, or employees, but instead they were indicative of the disproportionate constraints women face within economic sectors.

He said to overcome these challenges, innovative and evidence-backed policies and interventions could be adopted.

Agba said this would help to address the drivers of economic gender gaps while further contributing to the evidence base on effective programming to empower women in Nigeria.

“By putting our resources and commitment behind interventions that are proven to work, and scaling back those that do not.

“The government of Nigeria and its development partners can accelerate progress toward gender equality and inclusive growth, which is what the women and men of Nigeria urgently deserve,” Agba said.

The Minister of Women Affairs, Pauline Tallen, also emphasised the need for partnerships within government and across sectors with diverse stakeholders to address the multifaceted issues that hold women back.

Tallen, represented by Mr Idris Muhammed, Director, Economic Services in the Ministry, said Nigeria could not afford to lose out on the earnings of half of its population.

She said that the Ministry of Women Affairs was leading the nation’s urgent action to crystallise a paradigm shift toward designing and implementing more gender-equal policies and programmes.

“Women’s economic empowerment is not only a moral right to ensure our country’s mothers, daughters, sisters and wives succeed in their personal and professional endeavours.

“It is also an economic imperative for driving forward inclusive development and economic growth,” she said.

The Country Director, World Bank Nigeria, Shubham Chaudhuri, in his remarks also underscored the need for the involvement of diverse stakeholders in ensuring women’s economic empowerment.

Chaudhuri said findings from the report should be translated into practical action by involving all stakeholders and ensuring they all played their part in closing the gaps that exist.

Vaillant said the report revealed that women farmers in Nigeria consistently earn less than men farmers because they use less valuable crops, fewer inputs and less productive labour than their male counterparts.

“Women wage workers in Nigeria consistently earn less than men. This is because Nigerian women consistently work in lower-paying sectors than their male peers.”

She said each of the drivers of the gaps identified in the report informed a policy priority that was backed by research and could help policymakers narrow gender gaps in earnings.

.”Reports have it that the key takeaways from the panel discussion include the need for more extension workers, more policy implementation by the government and the need for women to access cheaper loans.

Others include building systems from the grassroots up, skills development for women, a societal transformation of norms and behaviours, and anti-bias training on gender at all levels.