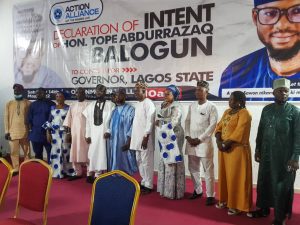 Balogun, at his declaration of intent in Ikeja before party faithful, said the needs and comfort of the masses remained his dream, hence his “Lagos Rebirth Agenda”.

He said: “My dream is exceptionally meant for the good people of Lagos to be relatively prosperous based on the lofty principle of equity.

“One of the major goals of the “New Lagos” is to lighten the burden of all residents in many facets of live by overhauling a whole lot of systemic rots in many sectors of the state,  thereby taking our dear state to the enviable status it belonged,   among other cosmopolitan cities of the world.

According to him, major cities all over the globe are mostly recognised for their unique features and Lagos should not be an exception because of its economic progress.

He urged residents to stop lamenting but rise to change the narratives by walking the talks.

“My mission is clear and my vision is the same as that of many indigenes of the state who have no other place to call home. The atmosphere of Lagos for all to prosper has been the mantra of our founding fathers historically.

“As such, many that had traversed this state will always find it good enough to thrive and prosper.

“Alas, this unique feature has been reversed and the residents now find it so difficult to exist in this same once upon a time “prosperous” Lagos,” he said.

Balogun expressed readiness to fight joblessness, and poverty and create the enabling environment to encourage individuals and organisations to thrive for many to be meaningfully engaged in productive activities.

“Where is the genuine support as well as interest in industrial development so as to make life more abundant for the good people of Lagos?”

Balogun said that Lagos held  Nigeria’s economic and commercial lifeline and the best in Africa in terms of well-populated human resources as well as Africa’s top Foreign Direct Investment destination.

Unfolding his Lagos REBIRTH agenda, Balogun explained that ‘R’ stood for Rural Development, ‘E – Education and Energy, ‘B’ – Broad base and Inclusive Governance, ‘I’ – Infrastructure, ‘R’ – Restoring Security of Lives and Property, ‘T’ – Technology and Transportation and ‘H’ – Healthcare and Housing.

“The actions embedded in the above idea of REBIRTH will lead us to create 450,000 jobs with a promise to roll out employment forms for potential employees for about 200,000 jobs.

“These forms are to be submitted to our party secretariat for immediate employment two months after being sworn in while the remaining 250,000 will be gainfully employed afterwards.