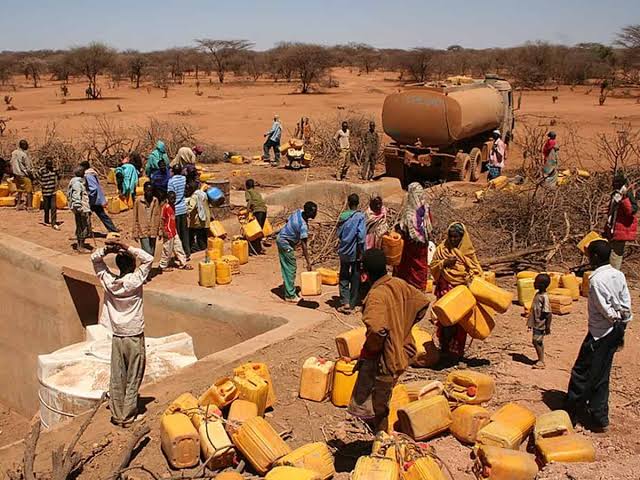 Martin Griffiths, under-secretary-general for humanitarian affairs and emergency relief coordinator also called for urgent solutions to save lives and communities amid the severe drought.

Griffith, who concluded a two-day visit to Kenya on Friday where he saw first-hand the devastating impact of a fourth consecutive failed rainy season in the Horn of Africa, gave the warning in a statement issued in Nairobi.

“We have been ringing the alarm on this crisis, and urging whoever is able to contribute, for many months,” Griffiths said.

He added during his visit that he met with people in the village of Lomopus in Turkana County, northwest Kenya, and spoke with displaced people in Doolow, Somalia, as well as Korehey zone in the Somali Region of Ethiopia.

“Each of the people I spoke with was clear: this crisis is threatening both their lives and their way of life.

“They need the world’s attention and action. Now!” Griffiths said.

The UN said the drought in the Horn of Africa region had already affected more than 18 million people across Ethiopia, Somalia, and Kenya, including at least 16.7 million people who are waking hungry each day and do not know where their next meal will come from.

These numbers, the UN said, would be expected to rise in the weeks ahead, as the current rainy season – which ordinarily lasts from March to May – has been below average, making this the longest drought in the Horn of Africa in at least four decades.

The UN official lauded the donors for their pledges and commitments to help respond to the drought in the region.

“But the reality is that we are out of time: if we don’t immediately receive new funding to scale up humanitarian operations, we are faced with the prospect of significant loss of life in the period ahead,” Griffiths said.

In the village of Lomopus, community members told Griffiths that this is the worst drought they have endured in living memory, noting that many families have lost their livestock and are struggling to survive.

“Those who manage to buy food are sharing their meager supplies with their neighbors, while many only have palm fruit to eat.

“Children in the village depend on the government’s school feeding program to have one meal a day, as there is often no food at home,” he said.

During his visit, the humanitarian chief also met with Kenyan government officials, with whom he discussed the government’s response to the drought, as well as the vital need for life-saving action today, accompanied by support for drought-affected communities to adapt and thrive in the future.

“If I have one message to the world, it is to not forget the people of Lomopus and others across the region who desperately need our support.

“These people are the human face of the global climate crisis, which they have done nothing to create.

“We must step up and stand in solidarity with them before it is too late,” Griffiths said.