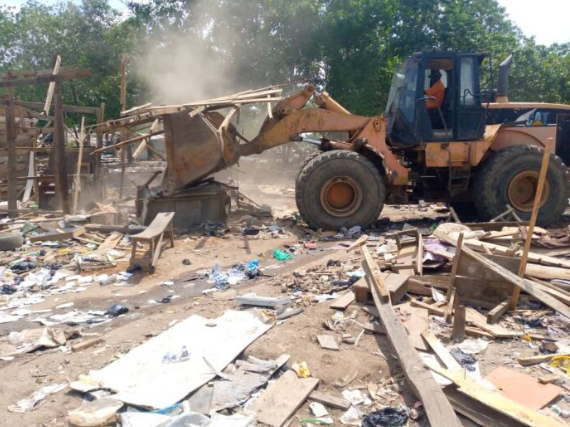 Mr Ikharo Attah, Senior Special Assistant on Monitoring, Inspection and development to the FCT Minister, who led the operation, explained that over 4,000 shops, shanties would be affected by the exercise in the next few days.

“We have gotten intensive complaints of security challenges in the ever busy Apo-Dutse Pantaker market and that has been very worrisome here.

“The FCT Minister, Malam Muhammad Bello, FCT Police Commander, Sunday Babaji, and several others have raised concern over what is going on here.

“There are good people here and there are very bad and wrong people here. Because it is an illegal market, in fact the largest not only in Abuja but the whole of the North Central region,” he said.

He said that the FCT Minister gave the directive that shanties should not be in the entire market so that the plot owners would be able to take over their land and start development.

“Everyone, who lives around here, is scared; we have gotten complaint through the FCT Ministers, Royal father’s and other persons that what is happening here is very dangerous.

“We cannot estimate how many shanties have been removed but in the final analysis, we are expecting to see over 4,000 shops, shanties others removed,” he explained.

Earlier, the Chairman Association of Scrap Dealers, Apo-Dutse Panteka Market, Malam Anas Ismail, said most of the youths that operate in the area depend on the scrap business for survival.

He appealed to the FCT Administration to provide a place for the genuine scrap dealers to continue with their business.

Ismail explained that with the high level of insecurity in the country, the traders who are mostly youth should be given serious attention.

“We cannot fight government, but now that the market is demolished there should be another place for us to relocate, else some may turn to criminals,” Ismail said.

Also, the Coordinator Abuja Metropolitan Management Council (AMMC), Shuaibu Umar, who came for inspection, told journalists that the size of the Pantaker market is almost equivalent to a district on over 50 hectares of land.

“We have started the demolition process in Apo -Dutse Pantaker market almost three months ago, the size of this area is very big, people are living here illegally, they have no permission, and the administration gave them adequate time.

“Getting rid of this type of development is for the good of the entire city, if you leave them to take over the place there would not be sanity,” Umar said.

He lamented that many developers had plots there but could not access it because of the illegal acts; but with the removal of the shanties, they would take over their plots.

“The level of criminal activities here is higher than those doing their legitimate businesses.

“This place could be about 50 hectares of land or more than, it is the actual survey that will determine but it is almost a district,” he said.