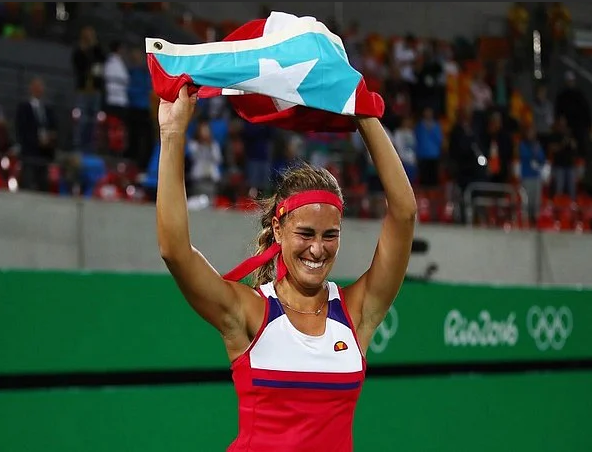 “Today, I announce my retirement from tennis. After a tough three-year fight with injuries and four surgeries, my body (has) had enough,” the 28-year-old said in an Instagram post.

“This decision isn’t an easy one because I would’ve loved to retire on my own terms, but sometimes life has other plans,” Puig said in the post, while also announcing her post-playing plans include a job in broadcasting with ESPN.

Puig became the first-ever gold medallist from Puerto Rico at Rio 2016 when, at age 22, she beat German Angelique Kerber in the final match.

That was after earlier wins over two more Grand Slam champions, Garbine Muguruza and Petra Kvitova.

In other news; Puerto Rican, whose career-high ranking was 27, was not able to compete for back-to-back gold medals in Olympic women’s tennis at Tokyo 2020 due to injury.

Okonkwo made the call in an interview with our correspondent in Awka on Tuesday.

She said that Nigerian women should take their destinies in their hands by making themselves relevant in the ongoing political process.

The ECDU official stated that women should play frontline roles in the decision-making process in order to build a prosperous nation.

She urged women in the country to obtain their voters cards and vote for the right candidates in the 2023 general elections.

”The electoral system is becoming more transparent, we are becoming sure that our votes will count. So let’s get our voters cards.

”Let’s preach the message to people around us. The voters card is the tool we need to enthrone the right leadership,” she said.

Okonkowo said that with the active participation of women in the political process, the country would elect credible leaders in the forthcoming general elections.

She described the new Electoral Act as a good omen to the electoral process, saying “it will enthrone sanity and transparency”.

”With the ammended Electoral Act, our votes will count. Election results won’t be changed easily. Rigging in 2023 is looking nearly impossible.

”Results will be directly transmitted from polling units to INEC server. The results can be viewed online from any location,

”The implication is that manipulation will be defeated. So, the voters card is an important tool in our bid to enthrone the right leadership.

”Clearly, there is no need to remain in the back bench. We owe this nation a duty to support the