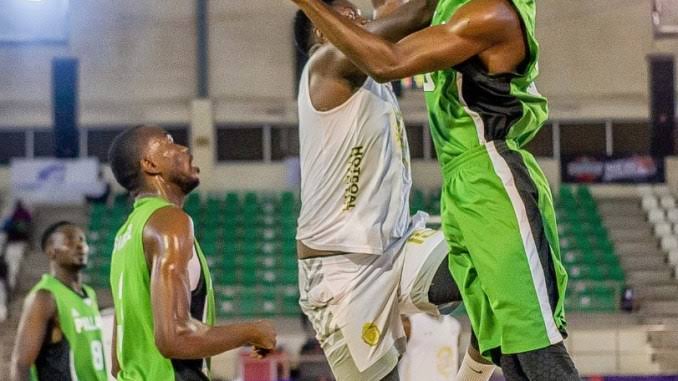 The Abuja based club side is yet to lose a single game in the championship having gone a total of 19 games unbeaten since the start of the tournament on Feb. 6.

The encounter between Mo’ Heat and Premier League giants Nigeria Customs, which was dubbed ‘the final before the final’, saw both teams slugging it out in a battle of superiority in Group A.

Both teams, having won their two consecutives in the group and already secured semi-final tickets as the top two teams in the group, had nothing but pride at stake to fight for.

It was Nigeria Customs however who went on the front foot blowing up a six-point lead to take the first quarter 24-18.

Mo’ Heat kept their opponents in check though reducing the deficit to a three-point lead for a 39-36 score line at the end of the second quarter.

They gradually began to gain momentum and impose their game on Customs as they completed a stunning come back and took a two-point lead to finish the third quarter at 53-51.

Bright Osagie led the way for Mo’ Heat with 18 points, six rebounds, including a 92.3 per cent success rate with the free throws.

The fourth quarter was a nervy affair as Customs tried to claw their way back into game but Mo’ Heat remained solid and resilient as they further stretched their lead to five, holding on for a 72-67 win.

The Mo’ Heat topped the Group A table with six points having won all three games, while Nigeria Customs finished as runners-up with five points.

Delta Force finished third with four points after beating FCT Hardrockers 70-52 to record their first win, while FCT Hardrockers with three points having recorded no win, finished at the bottom of the four-team log.

“Our goal right from the onset of this championship is to make it 21 out 21 and I am happy we are just two games away from achieving our dreams.

“We know the kind of investment we’ve put into this team and we are confident that they will definitely give us result, the evidence of which is visible for all to see.

“Anything I do, I always ensure that it is done very well and this is just the beginning of better things to come with this team,” an elated Mohammed Shehu, the Chairman of Mo’ Heat Basketball Club said.

Results of other games also played on Friday saw Gombe Bulls, who had already booked a semi-finals berth, defeat Hotcoal Ballers 70-64 to finish top of the Group B table.

In a dramatic twist, Kano Pillars who hitherto had lost hope of qualifying to the semi-finals, surprisingly picked up the last top-four spot.

This was after they defeated Kwara Falcons 77-61 in their final group game to finish with four points and second in the group by virtue of a superior head-to-head and goal difference.

Kwara Falcons (-12) and Hotcoal ballers (-17) with four points but with inferior goal differences finished in the third and fourth positions, respectively.

The championship which resumed with the ‘Elite eight’ on Wednesday saw eight teams divided into two groups (four each) with two best teams from each group expected to advance to the semi-finals on Saturday.

The finals will be played on Sunday to determine the winner of the championship.