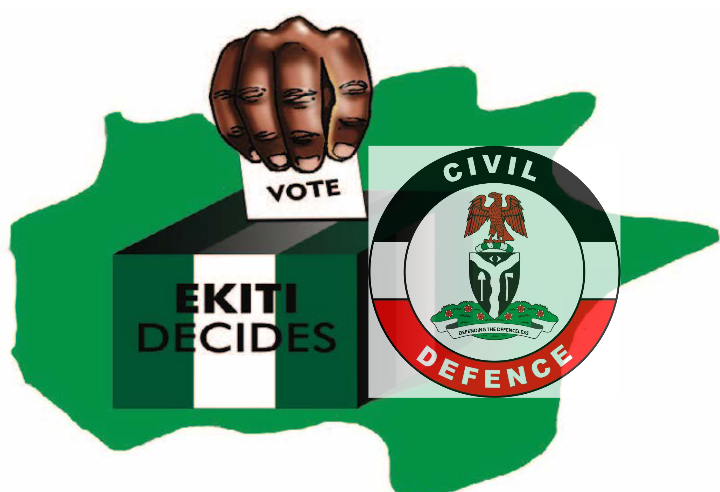 Reports have it that there had been publications on some media platforms indicting NSCDC operatives of snatching money meant for vote buying during Ekiti election.

NSCDC Spokesperson, Mr Olusola Odumosu, in an interview with our correspondent, said there was no collection or hijacking of any money belonging to any political party, their agents or individual at Ikere area of Ekiti.

Odumosu, however, said that two persons were arrested in connection with disrupting the state’s peaceful election.

“The timely intervention of the Corps restored normalcy to the polling units,” he said.

He said that only a sum of N6,720 was found on the suspected vote buyer after a thorough search was conducted on her.

He further said that the suspects were later released in order not to deprive them after being accredited to vote.

The Spokesman attributed what he described as ‘false report’ an attempt to cast aspersion on the image and credibility of the Corps.

“The NSCDC is a noble organization with credibility and professional orientation, hence, its personnel cannot be moved by any monetary inducement.

“We would report and return such illicit money to the authority if such a situation had arisen as has been done in other past elections in the country,” he said.

Reports  have it that Deputy Commandant-General, Haruna Muhammed, in charge of the election operation and top officers of the Corps monitored the election in Ekiti and dispersed groups engaged in vote buying.

Odumosu said the Corps’ Commandant General, Ahmed Audi, congratulated all personnel who took part in the election for an impressive outing.

He charged them to continue to be good ambassadors of the Corps whenever they found themselves on national assignment.

He, however, assured all personnel of the Corps’ commitment to ensuring that the benefits due to each operative are sorted out in due time.