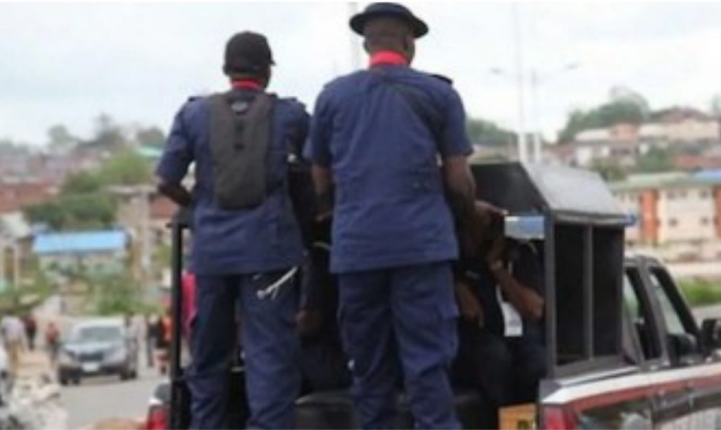 The Nigeria Security and Civil Defence Corps (NSCDC), Oyo State Command, has confirmed the death of one person and four others injured in an accident involving an 18-seater bus and a motorcycle in Ibadan.

DCC Benedict Effanga, the Head of Disaster Management Unit, NSCDC, Oyo State Command, confirmed the incident in a statement on Thursday in Ibadan.

An 18-seater bus allegedly skipped its lane and rammed into four motorcycles and a Camry car on the other lane at about 4:44 p.m. on Bodija road, Ibadun on Wednesday.

“A distress call was put through to the Unit desk at the State Headquarters, Agodi, Ibadan on Wednesday, to report a road accident that involved the commuter bus and the other vehicles.

“The commuter bus skid off its lane to the other lane where it rammed into 4 motorcycles moving in the opposite direction and brushed another Camry car on the side.” Effanga said.

Effanga said that preliminary investigation by the NSCDC revealed that the cause of the accident was brake failure.

He said that the bus was damaged along with the Camry car while the motorcycles were crushed.

He said that the corpse had been taken off the road while free flow of traffic was immediately restored by the NSCDC officials after a brief gridlock.

In other news, the Apapa Area Command of the National Drug Law Enforcement Agency (NDLEA ) in Lagos State has advised parents to monitor their children and wards more against hard drug intake.

The Area Commander, Mr Ameh Inalegwu, gave  the advice on Thursday  at a sentisation programme  in Apapa.

He also advised parents to spend more time with their children to know their friends and monitor their activities.

Reports have it that the programme was part of the command’s activities to commemorate the 2022 International Day against Drug Abuse and Trafficking.

“The UN set aside every June 26 to commemorate the day.

The UN has asked all segments of society to adopt actions to sensitise their immediate communities about the dangers of drug abuse and trafficking.

“The theme for this year’s commemoration  is:  “Addressing Drug Challenges in Health and Humanitarian Crises”.

Inalegwu decried the high rate of illicit drug consumption in Apapa, and urged parents to guard against their children  becoming illicit drug users or traffickers.

He said that NDLEA would continue  to develop strategies to fish out illicit drugs users and traffickers.

The Traditional Ruler  of Apapa, Chief Akeem Ogbara, told NAN on the sidelines  that the community was battling with hard drugs consumption.

He said,” The community has longed for this sensitisation and we want it to continue.”

One of the participants, Mrs Victoria Anya, urged the Federal Government to tackle pharmacists selling controlled drugs without prescription.

According to Anya, many youths take controlled drugs in excess.

He described the excessive intake  as drug abuse.