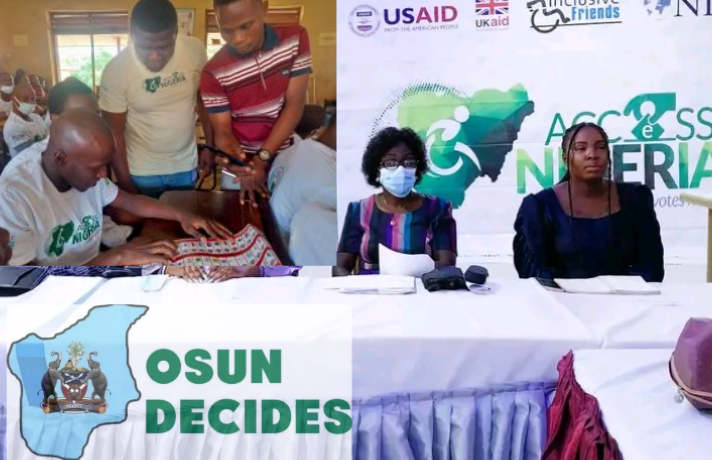 Osun 2022: NGO sensitises students with disabilities on “right to vote

A Non-Governmental Organisation, Access Nigeria Campaign, on Thursday sensitised students living with disabilities in Osun, on their rights to vote during the July 16 gubernatorial election in the state.

Reports  have it  that the sensitisation was held at Secondary School for People with Special Needs in Osogbo.

In his remarks, Mr Oluwaseyi Moses, the Programme Manager of the organisation, said the programme was to educate students, who were of voting age to know about their civic responsibility and the procedures to follow during the election.

Moses said that understanding the election procedures would assist the students to vote without any form of difficulty.

He said the sensitisation was also aimed at reducing voters’ apathy among the students.

Moses said the students were taught in the various provisions that had been made for them by the Independent Electoral Commission (INEC) as well as in the new electoral act.

Moses said that over the years, the community of Persons with Disabilities had been disenfranchised from the electoral process.

“Access Nigeria Campaign is all about creating accessibility for persons with disabilities, especially in political and election process.

“And that is why we are in this school with our programme called “GOTV”, Get Out The Vote from people with disabilities.

“We have realised that concentration is not on these students with disabilities, who are of voting age and the reason we are here to teach them various provisions that will make voting easy for them on the election day.

“We are not here to teach them the party to vote for, but rather to educate them on their civic rights and the assistive provision available for them on the election day,’’ he said.

Moses said that the students were taught on Braille ballot guide for the blind, form EC30E, which is pictorial to enable the deaf to vote independently and form EC40H for disaggregated manner of type of disabilities.

He appealed to parents of the students to allow them to vote, adding that they are the future leaders.