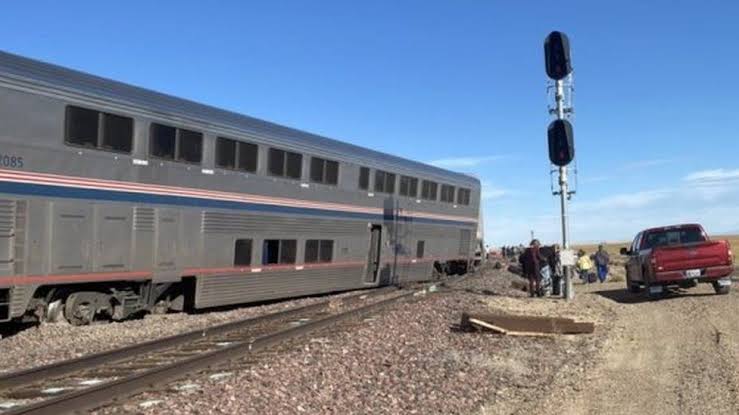 Two of those killed were on the Southwest Chief train, and the other was in the truck, said Justin Dunn of the Missouri High Patrol.

The train, carrying at least 243 passengers and 12 crew members, struck a dump truck that was obstructing a public crossing southwest of Mendon, Missouri, officials said.

The crash took place at an uncontrolled crossing where the BNSF Railway tracks meet a gravel road.

Dunn said the crossing had no electronic signals to warn traffic, which is common for the area.

At least 50 people were injured and there were “multiple fatalities” after the crash, according to Eric McKenzie, Director of the Chariton County Ambulance District, which operates near Mendon.

He said he was unable to confirm the number of people who had been killed.

Dozens of patients from the crash site began to stream into local hospitals, and some were transported by air in critical condition, officials said.

At least three people were transported to University Hospital in Columbia, said Eric Maze, a spokesperson with the University of Missouri Health Care system.

University of Missouri Health Care said over social media that it was caring for nine patients from the derailment.

Among them was Dax McDonald, who boarded the Southwest Chief train in Flagstaff, Arizona. Near Mendon, he was looking out the right side of the train and saw a large dump truck moving through a cloud of dust.

He recalled the train continuing to travel at a fast speed.

“Then a large bang happened and the train lurched forward,” McDonald said, adding: “Next it began tilting toward the right side before violently slamming to the ground.”

Video he posted to Twitter showed the inside of the train on its side with dishevelled passengers sifting through their toppled luggage.

One passenger posted a Facebook Live video moments after climbing out from the toppled passenger car.

Missouri Governor Mike Parson said in a tweet that he was “saddened” to hear of the derailment.

He said the Missouri State Highway Patrol and other emergency personnel were responding.

“We ask Missourians to join us in praying for all those impacted,” he added.

The Southwest Chief travels between Chicago and Los Angeles with stops in Kansas City, Albuquerque and Flagstaff, according to Amtrak.

The crash came one day after another Amtrak train collided with a car in California’s East Bay, killing at least three people.

In that instance, there were 85 people on board; the train was traveling from Stockton to Martinez when the collision occurred.

There were no reported injuries among the train passengers and crew, officials said.