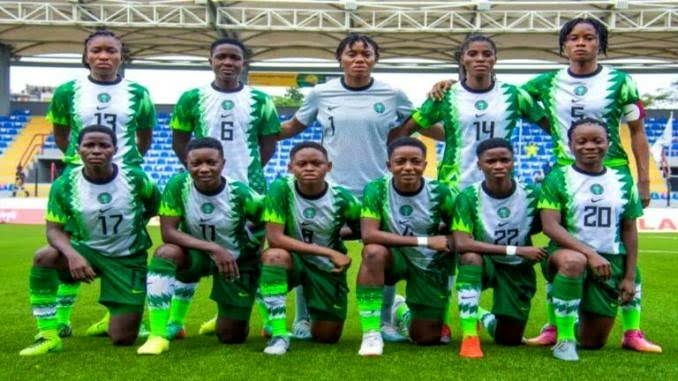 Share on FacebookShare on Twitter
The Falconets are paired in Group C along France, South Korea and Canada.
They began their campaign on Aug. 12 in their group stage with a 1-0 win over France and on Sunday, defeated South Korea 1-0.
The goal against South Korea on Sunday was scored by Esther Oniyenezide, in the 83rd minute, the only goal that pushed them to top of the group.
They are expected to play the final group stage on Thursday against Canada.
Speaking in separate interviews with NAN in Abuja on Tuesday, the soccer enthusiasts said the team had done the country proud and urged team to break the Jinx by lifting the title.
Chairman of the Sports Writers Association of Nigeria (SWAN), FCT Chapter, Bunmi Haruna, said the girls performed extremely good. For them to win two consecutive games at the World Cup is a bravo.
He said It was nice to see the Falconets win two consecutive games at the World Cup.
“The world cup is the biggest stage of football, so to achieve two wins in a row is no fluke. Kudos goes to the coaches and players for making the country proud.
He advised them to keep it tight and remain focused, to reach their set-up target.
Assistant coach, National under-17 Team, Haruna Ilerika said the girls were seriously trying their best.
Coach Ilerika urged them to keep the flag flying because It was not easy to have played two matches and won.
“We are not sure of qualification yet even though we think we have qualified but till after the last group game that is when we know and we could say whether if we have qualified or not,” he said.
However, the system and strategies adopted by the team in the first two games showed that they had lots of qualities in training and the coaches in the team did wonderfully well on the girls.
He said the players’ marking abilities were excellent, observing that they attacked in mass and didn’t loose focus and their recovery rate was superb.
“ They have this ability to be able to chase the opponent around and don’t allow the opponents to play.
He said the approach made them to subdue their opponents from playing because they knew most of these opponents’  tactics and were quite good in ball distribution,  compared to any African side.
“ They were able to frustrate both Korean and France teams from their techniques and allowed them to resort to playing our own techniques because the more we frustrated them the more it becomes advantage to us in the game.
“ They ( falconets) are now becoming a dangerous team to play, which makes them a good team. The spirit of oneness in the team, let it continue,” he said.
“Falconets are playing on Thursday, if we get a draw at most, but if we win, we are happy.
“ We have played in the past; we played on the final twice and much is expected of them. I want to wish them best of luck as they go out in their next game,” he said.
A teacher and football lover, Oluwaseun Adetunberu, urged the falconets to keep their eyes on winning the title.
He said next stage of the competition would  be our challenges and this would be tougher than those they had surmounted.
The teacher said the girls had made Nigerians proud on the basics but the only means was for them to lift the title.
He said that government had been supportive because they knew the team could deliver.
“10th appearance is not just a thing to hammer on but victory is what we need. You girls are performing to expectations but the only expectations is for you to raise your country’s flags and colour,” he said.
Chisoba Okechukwu, an optometrist and football lover, said that the falconets had highly technical  midfielders capable of dictating the tempo of play with quick passing and movement.
He said no game was ever easy but the game was only getting harder and more intense.
He advised the team to ensure that they scored more points in first half, rather than late goals
“ This is the 10th appearance, we hope you could fight that back by winning the title for the first time. We want you to achieve that years awaiting.
Halima Yashim, a student of University of Abuja and football lover, said that tougher matches were still ahead.
She said the girls needed to up their game in defence because they would meet Spain or United States who would be hard nuts to crack, as a fleet-footed team.
He said those teams could spoil the day for our team if care was not taken.
Falconet match against Canada comes up on Thursday at 03.00 a.m.
The FIFA champion in Costa Rica started on Aug. 10  and expected to end on 28.