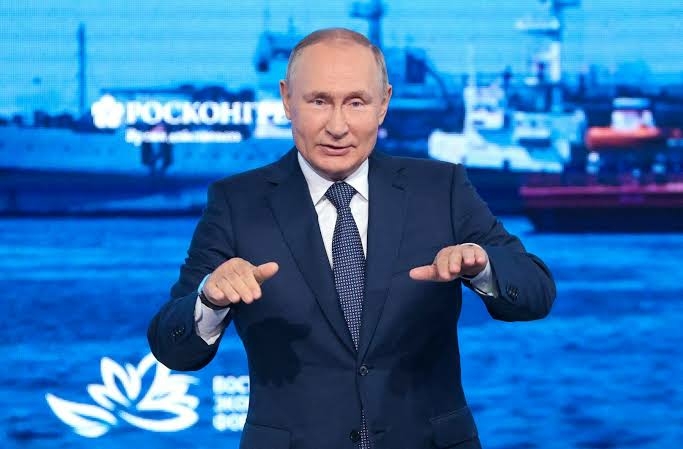 President Vladimir Putin said Russia had gained, not lost, from the conflict in Ukraine because it was embarking on a new sovereign path that would restore its global clout.

Putin increasingly casts the conflict in Ukraine, which he calls a “special military operation”, as a turning point in history when Russia finally threw off the humiliations which accompanied the 1991 fall of the Soviet Union.

In an attempt to underscore Russia’s tilt towards Asia, Putin, speaking to the Eastern Economic Forum in the Russian Pacific city of Vladivostok, said that the West was failing while Asia was the future.

In his main speech, Putin hardly mentioned Ukraine beyond a reference to grain exports.

But when asked by a moderator if anything had been lost from the conflict, Putin said Russia had gained and would emerge renewed.

“We have not lost anything and will not lose anything,” said Putin, Russia’s paramount leader since 1999.

“In terms of what we have gained, I can say that the main gain has been the strengthening of our sovereignty, and this is the inevitable result of what is happening now,” Putin said.

He added: “This will ultimately strengthen our country from within.”

He did, though, acknowledge that the conflict had unleashed “a certain polarization” in both the world and in Russia.

Russia sent tens of thousands of troops into Ukraine on Feb. 24 in what it called a special operation to degrade its southern neighbour’s military capabilities and root out people it called dangerous nationalists.

Ukrainian forces have mounted stiff resistance. Neither side has disclosed how many soldiers have been killed.

Putin’s assessment of Russian gains did not take account of NATO’s huge build-up of forces in eastern Europe and its planned admission of Sweden and Finland as members. Preventing NATO expansion was one of his stated objectives for intervening in Ukraine.

He also brushed aside the impact of sanctions that have starved Russian industry of key components like microchips, cut Russians off from international payment systems and led to the departure of thousands of Western companies.

The economy would contract by “around 2 per cent or a little more” this year and the budget would be in surplus, he said.

Putin, who turns 70 in October, told the West in July he was just getting started in Ukraine and dared the United States – which enjoys economic and conventional military superiority over Russia – to try to defeat Moscow.

It would, he said, fail.

The confrontation with the West over Ukraine has prompted Russia to accelerate a pivot towards Asia and particularly China, once a junior partner of the Soviet Union and now the world’s second largest economy.

For much of the past 300 years, Russia has looked to the West as the crucible of economic growth, technology and revolutionary ideas. In that period it has also twice been invaded from the West, by Napoleon and Hitler.

Putin, though, said that the West was failing because a futile and aggressive attempt to isolate Russia with sanctions was destroying the global economy just as Asia was rising to claim the future.

The United States and its allies imposed the most severe sanctions in modern history on Russia for its actions in Ukraine. Putin says the sanctions are akin to a declaration of economic war.

“I am speaking of the West’s sanctions fever, with its brazen, aggressive attempt to impose models of behaviour on other countries, to deprive them of their sovereignty and subordinate them to their will,” Putin said.

“In an attempt to resist the course of history, Western countries are undermining the key pillars of the world economic system built over centuries,” he said, adding that confidence in the dollar, euro and sterling was falling.

Among the guests at the forum was China’s top legislator Li Zhanshu, currently ranked No.3 in the Chinese Communist Party. Putin will meet China’s Xi Jinping next week in Uzbekistan.

Putin said that China would pay Gazprom for its gas in national currencies, based on a 50-50 split between the Russian rouble and Chinese yuan.

The West’s attempt to economically isolate Russia – one of the world’s biggest producers of natural resources – has propelled the global economy into uncharted waters with soaring prices for food and energy.

It has hurt Russia too.

Putin said Russia’s economy was coping with what he termed the financial and technological aggression of the West, but acknowledged some difficulties in some industries and regions.

He warned of a looming global food crisis and said he would discuss amending a landmark grain deal with Ukraine to limit the countries that can receive cargo shipments.