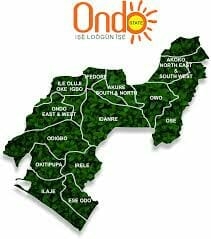 The Ondo State Government has restated its commitment to create and sustain a culture of overall development in the state.

Akeredolu, represented by his Deputy, Mr Lucky Aiyedatiwa, said government had consistently demonstrated commitment to overall development of the state through its legacy projects, particularly in infrastructure, social welfare, security and education.

He equally told his guests that the state, through the Ministry of Energy, Mines and Minerals Resources was collaborating and engaging relevant agencies in working out a positive solution to the issue of estimated billing instead of Pre-paid bill in the community.

He assured the community that there were lots of projects and programmes particularly, improvement on their roads that would soon come into fruition.

“Security is part of the government’s commitment to the people and that security of lives and property is important and paramount so that the farmers will be able to work well on their farms,” he said.

Earlier, the traditional ruler of the community, Oba John Adeniyi, appreciated Akeredolu on his elevation from Olu to the status of crowned Oba.

The traditional ruler amongst his requests, emphasised on additional secondary school for the community, of which the he was assured that the request would be looked into and appropriate steps taken to address the issue.

Government officials present during the visit are, Secretary to the State Government, Princess Oladunni Odu, Chief of Staff to the governor, Chief Olugbenga Ale, Head of Service, Pastor Kayode Ogundele and Commissioner of Youths and Sports, Dele Ologun.