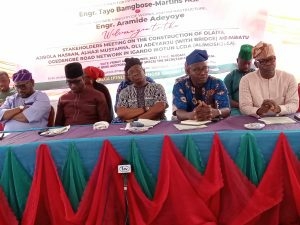 The Lagos State Government has appealed for collaboration towards recovery of Right of Way (RoW) for construction of five community network of roads in Alimosho Local Government Area.

The Commissioner for Physical Planning and Urban Development, Mr Omotayo Bamgbose-Martins, made the appeal at a stakeholders meeting on Friday, in Ikeja.

The meeting was on the construction of Ile-Eja/Olaiya, Ajibola Hassan, Alhaji Mustapha, Olu Adeyanju and Rabiatu Ogedengbe Road network, which, he said, would enhance connectivity.

Bamgbose-Martins, represented by the new Permanent Secretary of the Ministry, Mr Oluwole Sotire, said the five important roads and bridge would ease transportation in Igando-Ikotun Local Council Development Area of the state.

“The magnitude of this project and others being executed by the administration of Mr Babajide Sanwo-Olu in Alimosho Local Government Area underscores the strategic importance of the area as a population hub with high demand for social amenities.

“To enhance connectivity between communities in the axis, the government has undertaken several road construction projects among which are: Abaranje road, Akesan-Obadore road, Isuti road and Babafemi Dada-Shalom Academy road network.

“Thus, the commencement, as indicated by this stakeholders meeting, of another network of roads to the benefit of the people of this Local Government Area in particular and Lagosians in general, attests to the giant stride that this administration is making in achieving the T.H.E.M.E.S. Agenda, particularly the Making Lagos a 21st Century Economy” he said.

Bamgbose-Martins said there was need to remove encumbrances on the RoW for smooth take off of the project, while promising timely payment of compensation.

He said officials of the Ministry and Lands Bureau would visit communities to carry out the required assessments and serve the necessary notices, as well as assessment towards payment of compensation.

Bamgbose-Martins called for compliance with Physical Planning Laws by building right to prevent negative consequences such as flooding and building collapse.

He urged residents to take ownership of the project while reeling out phone numbers of the ministry for complaints and observations as well as the online app available on Google play store.

The Special Adviser on Works and Infrastructure, Mrs Aramide Adeyoye, represented by Mr Tokunbo Oyenuga, said the construction would shorten travel time to any part of the LCDA.

Adeyoye said construction would begin with the drains but the RoW did not end there, urging residents to always engage surveyors for further construction to accurately acertain the road setbacks.

The Permanent Secretary, Office of Infrastructure, Mr Daramola Olufemi, represented by Mr Gbadamosi Kamal, while giving a brief of the project, explained the various lengths and widths of the project and facilities included.

He said the project would eliminate a wooden makeshift bridge and provide interconnectivity between Akesan and Abaranje as well as easy access to various other communities in the area.

Joseph called for synergy with government so that at the end of the day, they would deliver the project on time.

The Special Adviser to the Governor on E-GIS, Dr Babatunde Olajide, said 26 RoWs were delivered by the Sanwo-Olu government which translated to completion of 26 roads.

He praised the Sanwo-Olu administration for its road construction and infrastructure drive.

He said that the government was using technology to capture the entire state to protect infrastructure from vandalism and at the same time enhance security of lives and property.

Stakeholders took turns to raise concerns on various areas which were addressed by the commissioner.