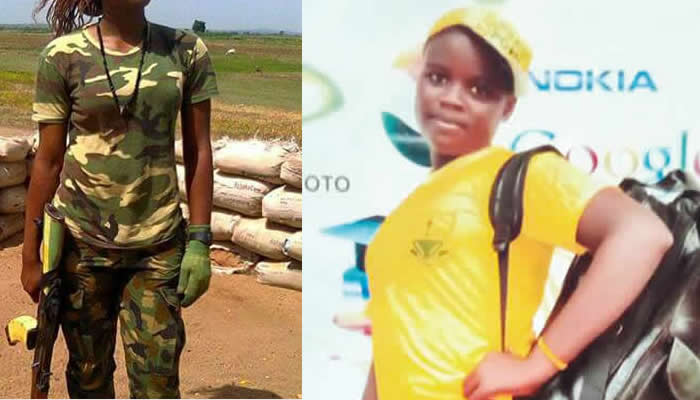 Soldiers frogmarch pupil to death for lateness, Father collapsed on hearing the news

The family of Queendaline Ekezie, a 15-year-old pupil of Army Day Secondary School, Obinze, Owerri, Imo State, are inconsolable after two soldiers in the school allegedly snuffed life out of her during a rigorous punishment.

Soldiers were reported to have asked her to frogmarch after she arrived at school late on Thursday. The victim, who became exhausted after repeating the exercise several times, was said to have collapsed.

She was reportedly rushed to an army hospital where she died. Her father, Hyginus, on hearing the news, passed out and was rushed to a hospital in the community for treatment.

It was learnt that Queendaline, who was in Junior Secondary School 3, was with a colleague, Delight Aguocha, a JSS 2 pupil, when the incident happened.

Aguocha told our correspondent that the rigour of the punishment killed her friend.

She said, “On that day, we had set out at 7am. We waited for a motorcycle to take us to school till it was 8am. When we became frustrated, we decided to board a commercial cab. But the driver did not leave the motor park until the car was filled with passengers.

“When we got to school at 9am, we met three sets of late comers on the ground. Two soldiers were asking each set to do frogmarch to a particular distance after which they picked their bags and entered their classes.

“When it was our turn, we were about reaching the finishing line when they said we were not doing it right and we should start again. After we repeated it, we went to pick our school bags, but one of the soldiers said he was still not satisfied.

“I completed the punishment the third time and I picked my bag and left. I suddenly discovered that my friend was not with me. When I returned to the place, I saw her crying. She started vomiting the food she ate that morning. She was saying, ‘my back, my chest.’ The soldiers were just staring at us.”

She added that while the 15-year-old groaned with pain, a teacher who was just arriving in the school, observed her and asked if she had been sick before the time.

Aguocha said she insisted that her friend was healthy, adding that the school principal, who also later arrived, joined in examining her.

The victim, who could no longer walk, was reportedly carried into the principal’s car en route to the army hospital.

The friend said Queendaline was given an injection and later put on a drip.

“After they put on the drip, she started vomiting blood. Blood was spurting out of her nostrils, mouth and ears. I called the teacher to inform her and she alerted a nurse who said her condition had worsened,” she added.

The victim’s sister, Immaculate, a Senior Secondary School 3 pupil in the school, said her sister was not given adequate medical attention which contributed to her death.

She said, “On that Thursday, she left for school before me. But because she had a delay, I got to school earlier.

“I was called around 10am that she was in the hospital. They didn’t put her on oxygen and the drip had stopped flowing. When I saw her, she was vomiting blood and shouting. She suddenly became still and the nurse asked us to leave. They announced that she was dead.”

Immaculate said her sister’s dream of becoming a lawyer and fighting for human rights had been destroyed, adding that the soldiers should be held responsible.

It was learnt that the remains of the victim were deposited in the Federal Medical Centre mortuary, Owerri.

Our correspondent was told that the news of the victim’s death shook her hometown in Umuoso Mgbuisii, in the Ohaji/Egbema LGA of Imo State.

It was learnt that the deceased was the second of five children.

Her mother, Applonia, was too distraught to speak with our correspondent.

But the brother, Okechukwu, said the family wanted Queendaline buried and the family compensated.

The Chairman of the Ohaji/Egbema LGA, Ebenezer Amadi, said he was “deeply saddened” by the death because the victim was his uncle’s daughter.

He said the community was awaiting the report of the autopsy to determine its next line of action.

He said, “The soldiers came to meet the family for a meeting, but the meeting could not hold because the girl’s father fainted out of shock. From what we heard, she was being punished for the first time when she slumped and died. So, I cannot make any categorical statement until we see the result of the autopsy.”

The 82 Division’s spokesman and Deputy Director, Army Public Relations, Col. Sagir Musa, said it would be premature to comment on the incident as the Imo State Ministry of Education had planned to issue a statement on it on Thursday (today).