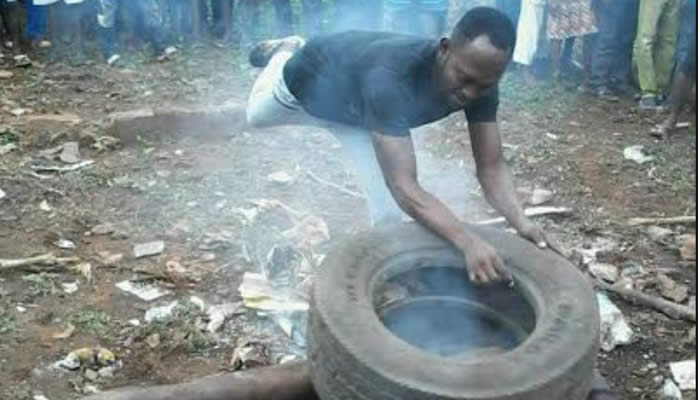 A middle-aged man suspected to be a phone thief was on Friday burnt to death in Calabar.

The incident happened at Goldie Street, along the University of Calabar (UNICAL) axis by Eastern Highway in Calabar South Local Government area of Cross River State.

An eyewitness, who gave his name as Fidelis Ekpeyong explained that the incident happened along UNICAL axis close to Goldie cemetery when a mob gave a suspected phone snatcher a hot chase and caught him, lynched and burnt him to death.

Ekpeyong said, “They pursued the suspect, who escaped from UNICAL axis to Goldie Cemetery and they lynched him there and set him ablaze. The angry mobs were mostly students of UNICAL and CRUTHECH living in and around Goldie and Mount Zion road.

“He was begging for mercy but the mob comprising mostly students, who were determined to use him as a scapegoat over the incessant cases of phone snatching around the area paid deaf ears to his appeal.

“He was beaten to a pulp but while he was still breathing, he was burnt alive.

“A lot of people identified the suspect, and many of them know him as one of the notorious criminals in the area that specialize on snatching of phones, laptops, and other valuables from passers-by in the area.”

Consequently, the eyewitness further said that the victim tried to jump to Goldie cemetery but the number of people chasing him weres too many for him to escape, “he could not outrun them, in fact he met his waterloo, because his cup was full and he died a very shameful death,” he stated.

The victim of the phone theft who pleaded anonymity said that his assailant threatened him with a machete before dispossessing him of his phone.

The 100 level student of Linguistics and Modern Languages, University of Calabar (UNICAL) said that the suspect was carrying machete and threatened to harm him before he was robbed.

“I was going to school around 6:57am for 7am GSS lecture. Since I was almost late, I decided to pass through Eastern high way to cross the broken fence that is leading to UNICAL Black and White field.

“When I got there, I saw one young man standing with machete; I stopped but he called me and started asking me to release my phone and money to him which I did, because I don’t know if it was only him or not because they usually robbed in group along that axis.

“He then asked me to run, but before I started running I noticed he too also took to his heels and I immediately started shouting thief, before people now came out and pursued him and they caught up with him and burnt him to death,” he said.

When contacted on Friday, the Police Public Relations Officer, ASP Irene Ugbo confirmed the incident but regretted nobody has been arrested but investigations on the matter were continuing.

“It is true, we got wind of the incident and an investigation is ongoing” she stated. At the time of filling this report, the corpse of the deceased was still at the scene of the incident.