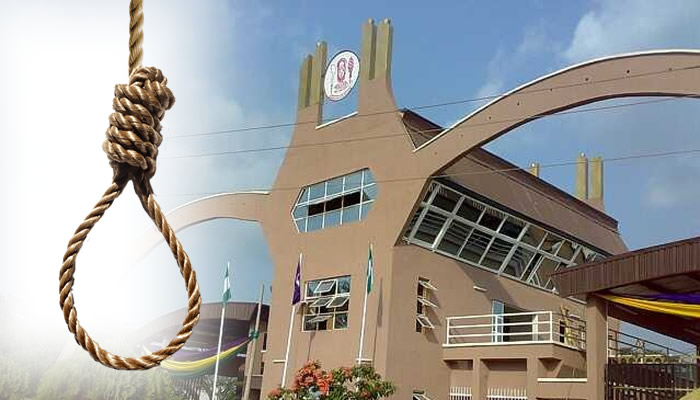 The management of the University of Benin, Edo State, has confirmed the death of one of its students who allegedly committed suicide.

The deceased, identified only as Adams, was said to have been found dead in his room at Ekosodin community, in the Ovia North-East Local Government Area of the state.

He was said to be a 500-level student in the Department of Computer Engineering.

It was gathered that Adams had been sighted at his department where he submitted an assignment, before he returned to his hostel on Thursday.

Some of his friends were said to have suspected that something had gone wrong when they could not access his room while he was inside.

However, his lifeless body was later said to have been found by his relatives who forced the door open in the evening.

Some of his colleagues seen at the department on Saturday declined to speak on the issue and referred our correspondent to the authorities of the school.

How we killed 100 level UNIBEN student inside church — Suspects

The Commissioner of Police, Mr. Johnson Kokumo, could not be reached for comments as calls put across to his telephone were unanswered.

But the Public Relations Officer of the university, Michael Osasuyi, who confirmed the incident, said the institution received the report with surprise.

Osasuyi noted that the deceased was a first-class student. He said, “The 500-level computer engineering student was discovered in his room at Ekosodin.

“He hung himself. His father came to see him and that was how it was discovered that he hung himself. The information that got to us was that he was a bright student, a first-class student.’’

Osasuyi urged students, no matter what they might be experiencing, to be bold enough to speak out.