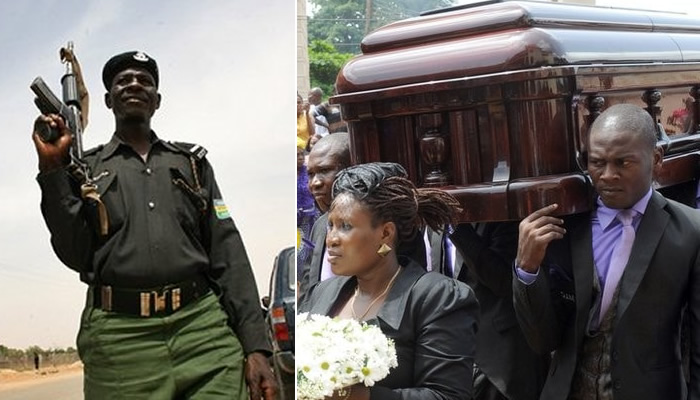 The Police in Enugu State have commenced investigation into an alleged accidental shooting at a burial ceremony which led to the death of a mourner while another sustained injury on Saturday.

The Enugu Police Command’s spokesman, SP Ebere Amaraizu, made this known in a statement in Enugu on Saturday.

Amaraizu said the incident occurred at Amanato Mburumbu community in Nkanu East Local Government Area, adding that the police recovered a locally-made single barrel gun at the scene of the incident.

Amaraizu said the victims were a woman and the chief mourner.

“It was gathered that tragedy struck when a man identified as Daniel Chukwu of Amanato Mburumbu community stormed the burial ceremony arena with his single barrel locally-made gun and perhaps never knew it was already set for action.

“It was further gathered that as the burial ceremony progressed and the suspect tried unslinging his gun, it allegedly discharged accidentally and hit one Ngozi Eze, 40, from Amanato Mburumbu community, who was confirmed dead.

“The chief mourner, identified as one Hawaya Nworiuzo, was also injured hence he was rushed to hospital for medical attention.

Davido allegedly cheats on Chioma with two women in Enugu

“The situation shocked sympathisers who scampered for their safety at about 12 noon today,’’ he said.

Amaraizu said that the suspect was helping the police in their investigation.

He also said the corpse of the dead had been deposited in a nearby mortuary for autopsy.