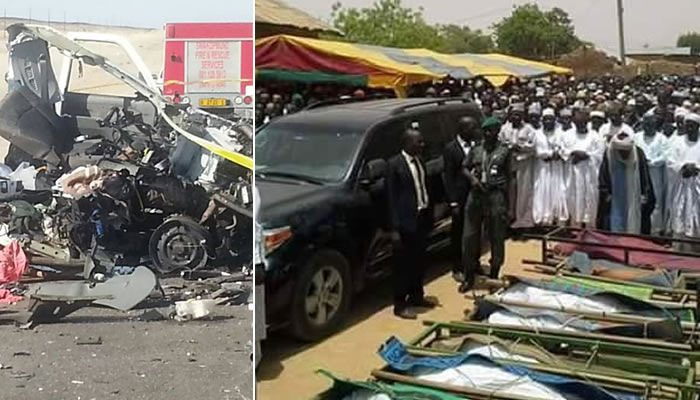 Alhaji Saidu Danbala Yar’kufoji, the lawmaker representing Bakura local government area in Zamfara State, is yet to come out of grief, after he lost his senior wife, Hajiya Bilkisu, three daughters, a son and four grand children in an auto crash last weekend.

Daily Trust reporter interviewed Alhaji Yar’kufoji, who was sitting under a canopy at his residence in Yar’Kufoji town receiving condolences. He said:

“I’ve just received a call that my senior wife has passed on at a medical facility in Kano. She is now the last person to die among the victims of the calamitous road crash. There is nothing we can do except to submit to the will of Almighty Allah,” he said.

“I married her in 1986. She was a very responsible, loving, and caring wife. She mothered all the four children who were lost in the crash. Sometime back, we had a misunderstanding and she sought for my forgiveness, which I gave. I pray for her gentle soul and those of the children to rest in perfect peace. May Almighty Allah grant them Aljannat Firdaus.”

“Late Hajiya Bilkisu, and the children, were staying in my residence here in my hometown of Yar’kufoji. I have two other wives who were living in Gusau, the state capital. The junior wife gave birth to a baby, and they went to Gusau to see the baby. They had the fatal accident on their way back,” he added.

The bereaved lawmaker further told Daily Trust that one thing he could remember was how his late children offered to help him when he was preparing for the wedding of their brother, called Mustapha. He said even when he rejected the offer they insisted that they would help him.

Frightening footage from the tragic Tanker accident on Otedola Bridge…

Alhaji Ahmad Usman, an in-law to Yar’kufoji, told Daily Trust that his 28-year-old pregnant wife Lubabatu, and two kids, are among the victims.

“It was around 9pm that day somebody came knocking my door and told me that my family was involved in an auto crash on their way from Gusau. He knew at that time they were all dead, but he didn’t tell me. I quickly dashed outside to inquire about what actually happened. I later learnt that they all perished. It was shocking. We were expecting Lubabatu to deliver sometime in May, but now I’ve lost her and our two kids. We also just received the death of her hospitalized mother,” he said, as he wept.

Usman added: “Late Bilkisu was the mother of all the four children of Yar’kufoji who died in the accident. Then there’s Lubabatu who was my wife, Shafa’atu and her two sons, Hibbatu who was also pregnant, and her son called Kasim. In all, the senior wife of Hon. Yar’kufoji, his three daughters and a son, and four grandchildren perished.”

Alhaji Lawali M. Aliyu is another in-law to Hon. Yar’kufoji. He lost his wife Shafa’atu, 27, and her two kids, 2-year-old Sakina and a two-month-old, Muhammad Anas.

“I’m devastated to the extent that I can’t even sleep for a minute. I have nothing to say except to pray for their souls,” he said.

Narrating his own part, Aminu Umar, who also lost his wife Hibbatu, said when his wife who was pregnant as well, was preparing to embark on the journey, she was looking sad.

“I noticed that in the morning she was wearing a sad look, so I asked her why. She said there was nothing wrong, and said goodbye, then left. You know we married five months ago, in December 2017. The way she waved at me when she left is what keeps coming back to me. She was so loving and caring,” he wept.

The driver of the golf vehicle, identified as Alhaji Yusuf Muhammad, left behind 18 kids, and his brother told Daily Trust how the auto crash happened:

“On their way back from Gusau they approached a truck conveying soft drinks coming from Sokoto.
The truck suddenly veered off its lane and swerved onto the Golf’s. The truck driver seemed to have been sleeping. Muhammad tried to brake, but couldn’t, and the truck ran over them.”

The PRO of the Federal Road Safety Corps in Zamfara State, Mr. Nasir Ahmad, confirmed the incident. He also said preliminary investigation had shown that the Golf car was overloaded and both vehicles involved were speeding.