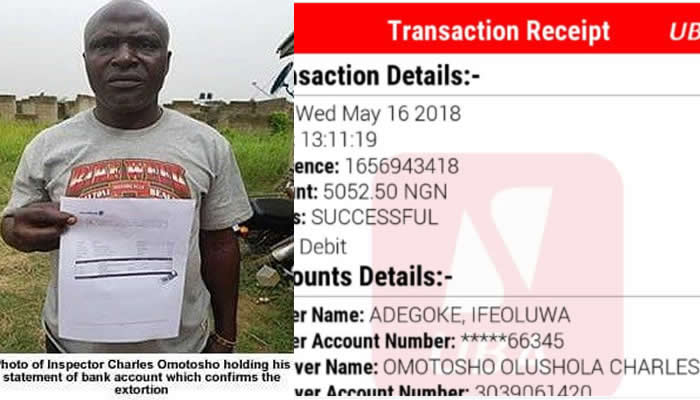 N5k Bribe: Photo of SARS operative, Inspector Charles, who was arrested in Lagos

A statement issued on Friday, the Assistant Commissioner of Police, Public Complaint Rapid Response Unit, Abayomi Sogunle, said the suspect identified as Inspector Charles Omotosho, was arrested following a complaint from a complaint made by the victim on Twitter. 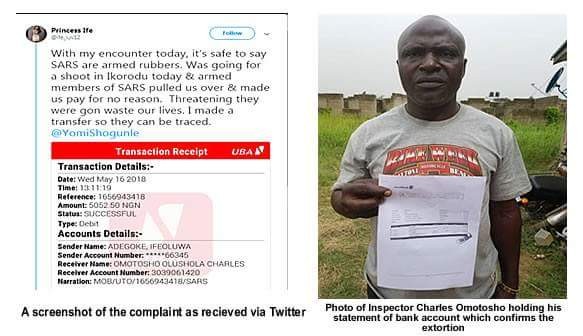 “On 16th May, 2018, the Public Complaint Rapid Response Unit (PCRRU) received a complaint from a citizen via Twitter [@ife_luv12] that a Special Anti-Robbery Squad (SARS) Operative forced her to make a bank transfer of Five Thousand Naira (N5,000) to the said SARS operative’s bank account following an arrest for no just cause” the statement noted.

“PCRRU immediately registered the case (Tracking Number #PCRRU316356) and initiated an investigation. The officer was promptly identified to be Inspector Charles Omotosho attached to Federal SARS, Ikorodu, Lagos State. He was immediately removed from front-line police duties and taken into custody.

In the course of preliminary investigation, a copy of the officer’s statement of bank account was obtained and the entry of the said transfer discovered therein. It has also been established that there was a contact between the officer’s patrol team and the complainant and others at Ikorodu as contained in the complaint.

PCRRU has handed the erring officer to the AIG Zone 2 Command Lagos together with a print out of his statement of bank account for necessary action, the outcome would be made public soonest.

Members of the public that are not happy with any encounter with the police are once again advised not to resolve to self-help but should lodge a complaint at PCRRU which is available 24/7 via any of the following channels; Calls Only: 0805 700 0001, 0805 700 0002 | SMS and WhatsApp Only: 0805 700 0003 BBM: 58A2B5DE | Twitter: @PoliceNG_PCRRU |Facebook:www.facebook.com/PolicePCRRU Email: [email protected] OR [email protected] | Website: www.npf.gov.ng/complaint.