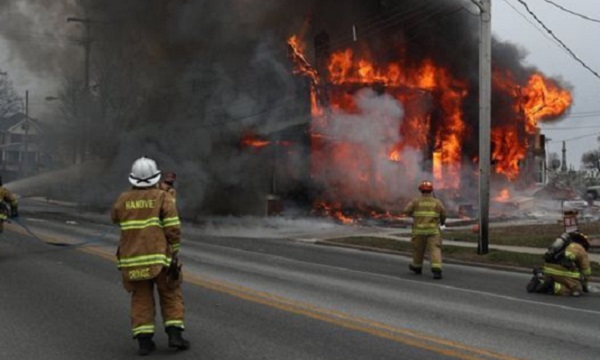 A fire accident which occurred at Foundation Close, Opebi, in the Ikeja area of Lagos State, reportedly claimed the life of a 60-year-old man identified simply as Monday, who reportedly slept off while cooking.

It was gathered that the man’s properties was destroyed by the fire which razed down his residence, after he slept off while he was preparing food on the gas cooker. Punch reported that the effort of officials of the Lagos State Emergency Management Agency and the Lagos State Fire Service who responded to a distress call, prevented the incident from escalating.

The victim’s corpse was discovered after the fire was put out and was taken away by officials of the State Environmental Health Monitoring Unit.

“When emergency workers arrived at the scene, they discovered that a residential apartment was involved. Investigation showed that the resident of the apartment slept off while cooking” a source said.

Few months ago it was reported that an overnight fire killed a family of four, simply identified as Eze’s family, at No. 13, Buraimoh street, Bariga area of Lagos.

The Director of Lagos State Fire Service, Mr Rasak Fadipe, who confirmed the incident said the incident occurred at about 2.48 a.m.

He said personnel of the service got to the scene of the incident as soon as they got information about the fire, but that due to the double burglary irons on the door and window of the apartment, they were unable to reach the victims in time.

“The apartment is a chemist store. The father, mother, and two children of ages five and eight were found dead inside the store.

“We advise that although one needs security in his or her house or business place, it should not be to the detriment of the people.

“Members of the family should always know the exist of their apartment whenever there is an emergency,” the director said.