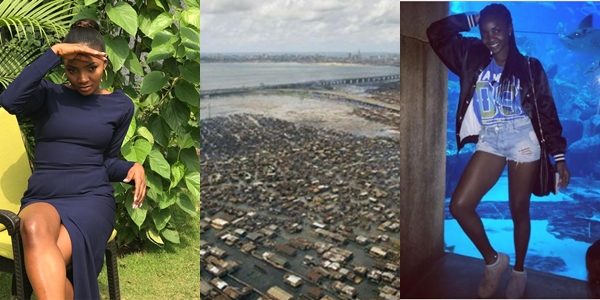 Following the recent report of a lady who reportedly jumped into the lagoon at Third Mainland Bridge in a suicide attempt on Sunday, Nigerian singer, Simi has some advice for her fans.

According to Simi pain doesn’t discriminate and each time one can’t trace where or when the hurt started, the person with the heavy heart should just talk to God. The singer’s post reads; 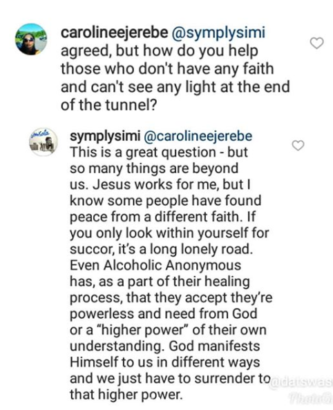 More than 24 hours after a lady allegedly jumped off the Third Mainland Bridge into the Lagos lagoon, relevant government agencies say they have no information about what transpired.

A video which began circulating online on Sunday evening stated that a lady parked her Sports Utility Vehicle on the bridge and jumped into the lagoon. A few hours after the incident, officials of the Lagos State Emergency Response Agency (LASEMA) began combing the lagoon in search of the lady.

There is still no official account about what happened. But on Monday, social media was rife with stories claiming the lady committed suicide after her extramarital affairs were exposed, and that a DNA test conducted on her three children revealed they were not from her husband.

According to the story, which has gone viral on Facebook, the lady arrested her lover who had duped her of N10 million and the man, in an attempt to prove his innocence to the police, published nude photos of them together.

Contacted on Monday evening, Chike Oti, the Lagos police spokesperson, said the police had no information about the incident.

“We don’t have any information,” Mr Oti, a superintendent of police said.

Adesina Tiamiyu, LASEMA’s general manager, said the agency has called on Lagosians with any information regarding the identity of the lady to come forward or report to the police.

“Our men are still combing the waterways alongside the marine police for any floating body. I’m also appealing to those who use the waters to alert us if they see any body.”

A source at LASEMA disclosed that the agency had found the owner of the Ford SUV, which in the video, was parked on the bridge during the incident.

“The person is just a first responder at the scene of the incident. He said someone did jump into the lagoon but we are continuing with our investigation to confirm that,” the source, who preferred not to be named because he was not authorised to speak on the agency’s behalf, said.