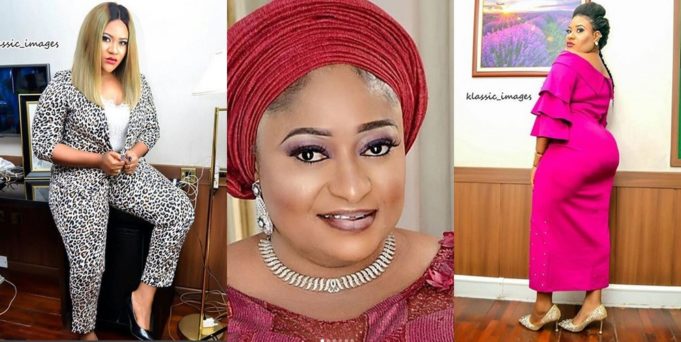 Actress Liz Anjorin has hit at Ronke Oshodi Oke over a comment she made about fellow actors who love to flaunt their latest material possession on social media. Ronke’s post appears to have been directed at Mercy Aigbe, Nkechi Blessing and Ijebuu, all of whom recently showed off a new material achievement.

Reacting to their show off, Ronke Oshodi Oke wrote:

“Before you show off, first look at the condition of your home. Have you ever seen a banker flaunting his or her car on social media?

However, her post didn’t sit well with Nkechi Blessing who threw a slight shade at her. Also joining the rank is Liz Anjorin who in a series of videos called Ronke Oshodi Oke a beggar. Below are her words. Check the screenshot below for more.

“I don’t put my mouth in things that don’t concern me. But how would you feel if I said some people, after finishing their unfortunate M.C job, move from one party to the other to beg for money? How would you feel?

If I post anything on social media, I’m not using it to oppress. We post because at times, you just look at where you’re coming from and just decide to thank God. Someone flaunted a house and a car, where were you when I was homeless?

My mom was neglected because she had a female child and I was the only child. Where were you when I was sleeping in the rain. I remember when I used to eat meat just once in a year. Where were you then. Now you are complaining that I’m flaunting.

You can’t say I shouldn’t berate her. Let’s all live a good life. This is pure hate. I don’t care who she was referring to. My own is that I started the flaunting on the 18th and I paved way for others. I’m proud of it and I’m happy for the others.

What she did shocked me. She can poison those flaunting their stuffs, if given the chance. For her to have had the gut to post such. She is wicked, so wicked.”

Nollywood is not responsible for failed marriages among celebrities – Ronke…