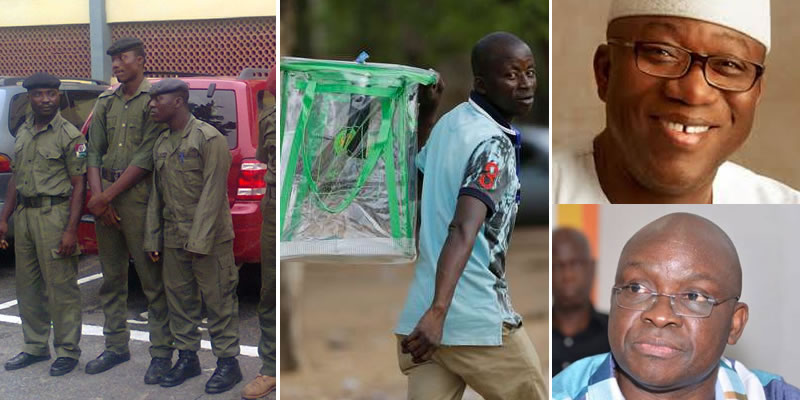 There had been tension and apprehension during the electioneering, especially with the deployment of more than 30,000 security men by the police and other security agencies in the state for the poll.

According to records by the Independent National Electoral Commission, in the 16 council areas of the state, there are 177 registration areas; 2,195 polling units; and 256 polling points, with 913,334 registered voters.

However, out of the figure, 667,270 are accredited to vote, representing 73 per cent of the registered voting population.

Also in the race are the Labour Party candidate, Sikiru Lawal, 59; Amuda Kazeem of KOWA Party, the All Progressives Grand Alliance candidate, Ayodeji Ayodele, 62; and the Alliance for Democracy candidate, Ben Agboola, 49.

Meanwhile, the Resident Electoral Commissioner in Ekiti State, Prof. Abdulganiyu Raji, has allayed fears that armed policemen drafted by the Inspector General of Police to the state for the election would harass the electorate.

The Peoples Democratic Party has accused the All Progressives Congress and its candidate in the Ekiti State governorship election, Dr. Kayode Fayemi, of clothing thugs imported from Imo and other neighbouring states to Ekiti.

The PDP alleged that the thugs were being given fake police uniform to unleash terror on voters.

The party also alleged that officials of the Nigerian Security Printing and Minting and top officials of the Independent National Electoral Commission were involved in plans to print matching sensitive voting materials, including ballot papers with similar serial numbers to facilitate the scientific rigging of the election for the APC.

A statement issued by the National Publicity Secretary of the PDP, Mr. Kola Ologbondiyan, in Abuja on Friday also alleged plots by the APC to use compromised policemen and offer voters N10,000 bribe each to vote for Fayemi.

He said, “Furthermore, the PDP questions why the police personnel detailed to Governor Ayo Fayose have been stripped to five while invading APC governors, such as Kogi State Governor, Yahaya Bello, are individually allowed to move around the state with squads of over 50 policemen and soldiers.

“The PDP is already aware of plots to detail the fake policemen to PDP strongholds to harass voters, attempt to cause confusion and in the process smuggle in counterfeit result sheets to aid their planned declaration of false results.”

When contacted, the Director of Media of Kayode Fayemi Campaign Office, Wole Olujobi, who debunked the allegations said the PDP was “applying reverse psychology”.

“It is accusing others of what it is doing. There is no need for us to use fake policemen when official policemen are on the ground. We won’t do such things and will never support it.”

“In the hands of the right man, a woman is a hundred different women” – Cee-c