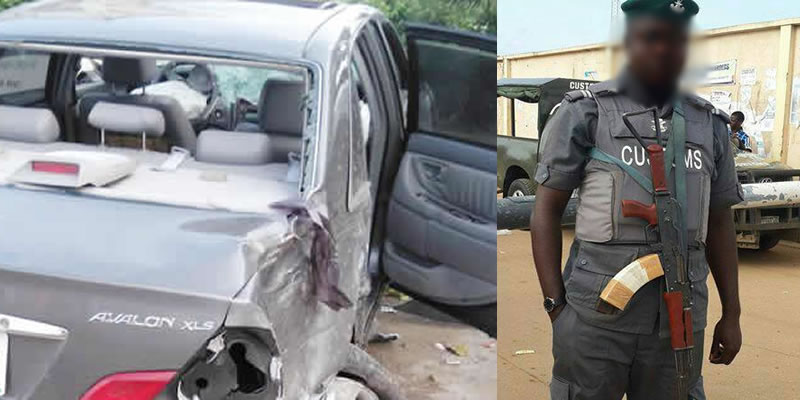 The Customs officers were in a Toyota Camry with the number plate, YLA 121 BJ, at a checkpoint when they were crushed by their colleague, who drove a Toyota Avalon, with number plate, YAB 366 JY.

The three officials were reportedly attached to the Seme Border Command, Lagos.

While the two crushed customs officers died on the spot, the driver of the Avalon was said to be unconscious at the Intensive Care Unit of the Badagry General Hospital, where he was receiving treatment.

Our correspondent gathered that officials of the Federal Road Safety Corps, led by the Badagry unit Commander, Fatai Bakare, deposited the remains of the deceased in a morgue.

A witness said the accident was caused by a burst tyre.

He said, “The incident happened around 7.45am on Saturday at Gbaji checkpoint. The customs officers were crushed to death by a Toyota Avalon driven by another customs officer of the same command.

“His car was descending the Gbaji Bridge and heading for Seme when one of his tyres burst. He lost control, thereby sending the two officers to their death.”

The customs unit commander, Bakare, however, said the accident was caused by speeding.

He said, “The customs officers were inside their vehicle at one of the checkpoints on the Lagos-Seme Road. The driver of the Avalon was on top speed when he crashed into them. He veered off the road and rammed into them. The two customs officers died on the spot, while the man responsible for the accident is in a coma.”

The Public Relations Officer of the NCS, Seme Command, Saidu Abdulahi, confirmed the incident and identified the deceased as Usman and Kabiru.

He also confirmed that the driver of the Avalon was a customs officer and identified him as George.

He said, “On Saturday, July 14, 2018, I received reports of an incident involving three officers of the Seme Area Command at Gbaji checkpoint. Usman and Kabiru were involved in a ghastly motor accident which resulted in their fatalities.

“The driver of the other vehicle, George, is currently on admission at a general hospital.”

A doctor at the Badagry General Hospital said on Sunday that the driver of the Avalon was still in a coma, adding that he was being monitored.

How Vice President, Osinbajo celebrated wife, Dolapo, on her birthday

PHOTOS: Tragedy struck in Lagos community as three dead, many injured in road…