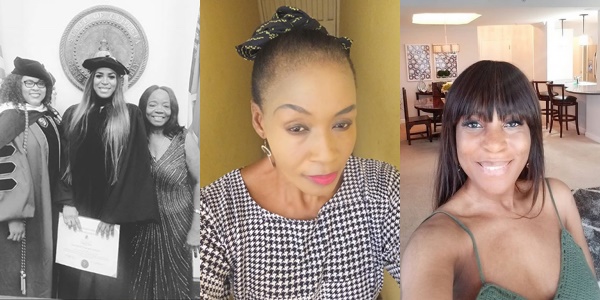 Known as one of the most controversial journalists in Nigeria, Kemi Olunloyo, has reacted to Linda Ikeji’s conferment with an honorary degree at an American university.

Kemi, who has often been at war with Linda congratulated the blogger on her honorary degree and disagreed with certain people who may want to believe it is fake.

First she posted this photo (seen below) of Linda receiving her honorary degree:

Then she followed up with the following write-up:

“#hnneducation #LindaIkeji has been conferred with an honorary doctorate degree from Trinity International University, Georgia for her work in media in Africa. Many busy bodies have been messaging me that it’s a FAKE degree. It’s actually NOT. Remember many Nigerians are #SBNI Smart but not intelligent. Let me explain…

“An honorary degree, in Latin a degree honoris causa (“for the sake of the honor”) is when a university had waived the usual requirements, such as matriculation, residency, dissertation, and passing of comprehensive exams.

“Some of you ask me why I “put Dr in front of my name and some fans call me #DrKOO.” I have an ACADEMIC doctorate in Pharmacy after a Bachelor’s with accelerated transition. All that oyinbo basically means I SAT IN A CLASSROOM!

“Linda was honored with a Doctor of Humane Letters. Can she really be addressed as #DrLindaIkeji? 95% the answer is no, you should not call yourself “Dr.” if your doctorate degree is an honorary one. But some universities might not mind so much if they do.

“Linda’s degree of Doctor of Humane Letters(D.H.L.; or L.H.D.) is almost always conferred as an honorary degree, usually to those who have distinguished themselves in areas other than science, government, literature or religion, which are awarded degrees of Doctor of Science, Doctor of Laws, Doctor of Letters, or Doctor of Divinity, respectively.

“ANYWAY, many celebrities, government officials and ordinary great citizens like @officiallindaikeji get those honorary degrees. Fmr First Lady Dr Patience Jonathan has two, one from UNIPORT and another from Hansei University in #SouthKorea. .

“To @officiallindaikeji welcome to the Dr Society of Nigeria. Academic or not, we are addressing you as #DrLIB aka Dr Linda Ikeji. When I get my honorary degree in #socialmedia mine will be #DrDrKOO.

“More power to you. #hnnwomenng”

I intentionally show off flesh when on stage – Ghanaian singer, Sista Afia