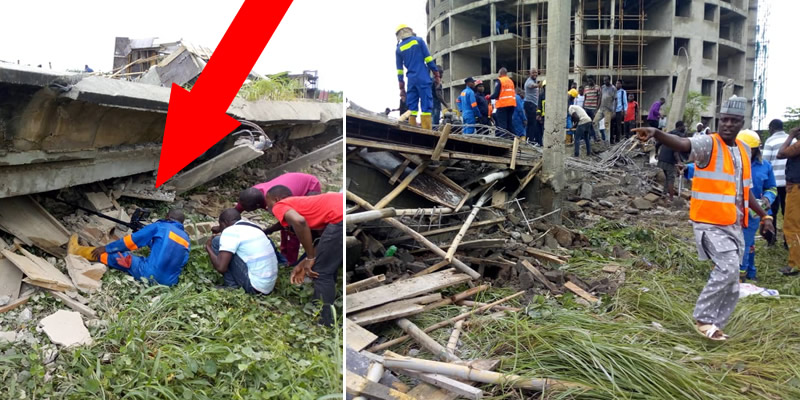 A four-storeyed building Friday collapsed in the Jabi area of the Federal Capital Territory, FCT, killing two people instantly while many others are stil trapped within.

A four storey building under construction on Friday collapsed in Utako area of Abuja. Workers including some foreigners are reportedly trapped in the building said to have been abandoned for over two years.

At least 18 people are trapped beneath the rubble of a four-storey building which collapsed around 1.30pm in the Jabi area of Abuja.

Our correspondent who is at the scene reported that the building which was under construction when it collapsed had over 25 people inside.

Rescue officials were said to have rescued about six persons while a corpse has been evacuated.

However, the heavy rain has also hampered rescue operations.

Eyewitness who spoke in condition of anonimity , told newsmen that the building collapsed because it was built with substandard materials.

Another eyewitness ,while blamming security agencies for the death of the two victims, said that they were called more than two hours of the incident without response.

One of the police officers told our correspondent at the scene that, “We have been able to rescue six persons. Two people have been confirmed dead while three have been rushed to the hospital.

Who is Kemi Afolabi’s husband?- All you need to know