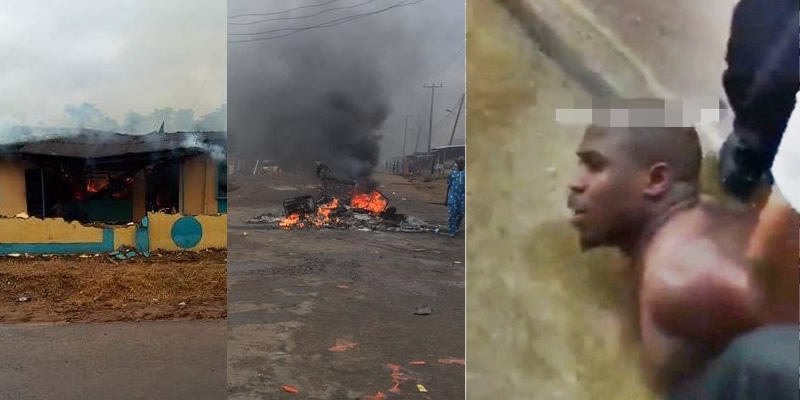 Osun Police Command has arrested at least 31 persons who allegedly participated in the razing down of the Police Area Command in Iwo town following the killing of a youth identified as Tunde Nafiu by a policeman attached to the Special Anti Robbery Squad deployed in the town.

A police officer attached to the SARS reportedly shot 30 years old Nafiu to death on Thursday night and the killing triggered a violent protest which led to the burning down of the police station and vehicles parked inside.

The Commissioner of Police in the state, Mr Fimihan Adeoye, in a statement made available to journalists in Osogbo on Saturday by the Police Public Relations Officer in the state, Mrs Folasade Odoro, said the alleged killer policeman had been arrested and taken down to the State Criminal Investigation Department in Osogbo.

The police said the commissioner of police had visited the scene of the incident and the damaged Area Command and also visited the Oluwo of Iwo, Oba Adewale Akanbi.

Adeoye explained that the command deployed SARS in Iwo in order to curb the incessant robbery. The CP said the operations of the SARS had helped the command in curbing armed robbers, saying 56 different vehicles have been recovered by SARS operatives.

The statement read, “Information was received that an operative of the Special Anti Robbery Squad attached to the Area Command Headquarters, Iwo allegedly shot and fatally wounded one Tunde Nafiu ‘m’, aged 30 years at Agboigboro in Iwo. The Area Commander immediately moved out, doused the tension and assured the gathered youths that justice will be done. The officer that allegedly fired the shot that killed the deceased was promptly arrested and transferred to the SCIID, Osogbo for interrogation.

“In the early hours of 24/8/2018, a very large crowd of youths thronged the Area Command Headquarters to protest the killing. The protest was however hijacked by some hoodlums who took the law into their hands. In the process, they torched the buildings housing the offices and residence of the Area Commander as well as three patrol vans and two other vehicles belonging to the officers of the Area Command.

“The Police exercised serious restraint in order to prevent further loss of lives. However, the hoodlums were eventually dispersed while 31 of them were arrested and undergoing interrogation. The situation has been brought under control while people are going about their lawful businesses.”

READ: IllBliss Reveals How He Was Violently Attacked by SARS Officers

The CP was also said to have visited the family of the deceased at Ileogbo to commiserate with them and to convey the message of the Inspector General of Police, Mr Idris Ibrahim, to the grieving family.

The statement revealed that normalcy had since been restored in the town while the CP said there was nothing wrong with the protest against the killing but warned against the destruction of property while showing grievances.