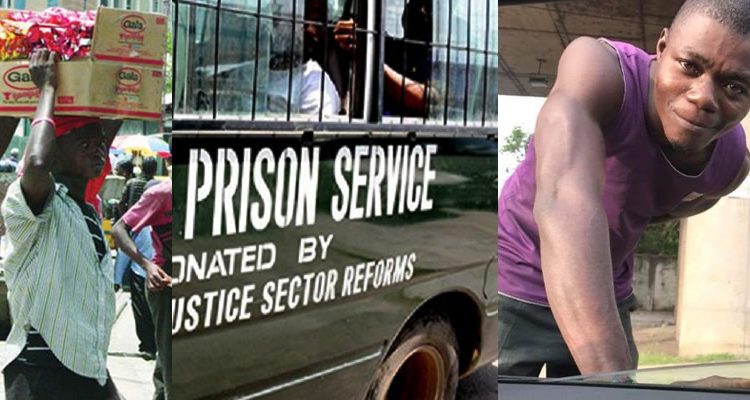 Gala seller, Ibere Ugochukwu who gave all his goods to prisoners in Lagos, reveals he was once a prisoner as he shares his touching story

Last month, Ibere Ugochukwu went viral for his very act of kindness that was witnessed by a resident of Lagos and shared online. Despite being a hustler on the streets of Lagos, Ibere decided to render help to some prisoners (Read here).

The prisoners were being transported in a Nigeria Prison Force van heading to Ikoyi Prison but were stuck in traffic. As usual, the prisoners stretched out their hands through the tiny holes by the sides of the van and the Gala seller’s next action surprised everyone.

He took the Gala he was selling and began distributing to the prisoners for free. When the van began moving, he dropped his basket by the side of the road, grabbed a handful of Gala and ran after them to make sure everyone gets a share.

Recently, the Humans of New York, an online platform known for sharing inspiring posts, caught up with him and he shared his own story. He revealed that he was once a prisoner who was sent to prison by a wicked boss. Read his touching story below

”A few years ago I worked as an apprentice in a cosmetics shop. I was supposed to receive a payment at the end of my term. But I was warned by the other employees that the owner would find a reason not to pay me. He’d always invent reasons to fire his boys right before their payment. So I made the decision to quit. But when I told him, he dragged me to the police. He told them lies about me. He told them I’d stolen so much money. And they tortured me. They tied my hands and legs and they hung me from the ceiling. They beat me. I went deaf from all the slaps.

For ten days I was given no food. My fellow prisoners would share little bits of their meals when they were finished. But some days I saw nothing. Honestly I was about to die. And I started to pray to God. And on the tenth day, the guards decided that it would cause too much trouble to let me die. They told my employer: After what we did to him, he must be innocent. Because he’d have confessed if he was guilty.

They released me into the world like a madman. And I’ve carried the memory ever since. I promised myself that if I ever found someone in a similar situation, I would help. So when I learned that prisoners pass down this road, I chose to hawk in this location.

READ: Native Doctor raises alarm after being ‘fed by witches’ in the dream

I waited until I finally saw the truck, and I pushed all my food through the bars. My fellow vendors couldn’t believe it. They asked me who would pay me for the food. I told them: ‘I didn’t do it for any man. I did it because of what God did for me. Ibere hopes to enter the seminary one day.

He’s selling food to save money for this goal, as well as to support his family back in the village. In the meantime he wants to open his own shop selling foodstuffs. Alongside the donations from inspired Nigerians who heard his story, $3000 was given to him from the HONY Patreon.” Another interesting topic; Disturbing photos of living conditions of inmates in Warri prison exposed