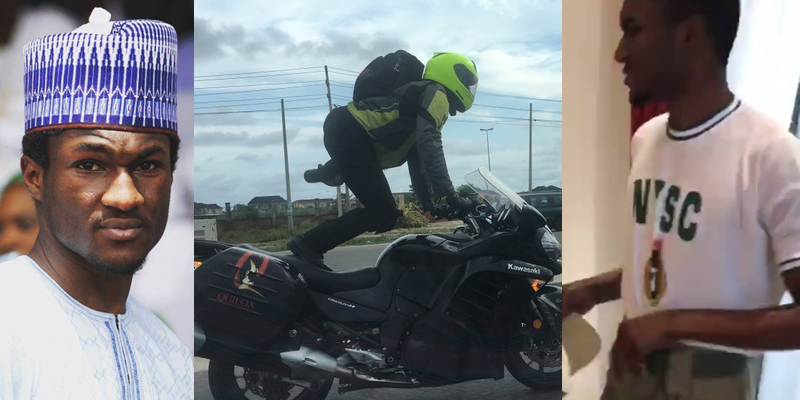 Yusuf, son of President Muhammadu Buhari, is currently enrolled in serving the country.

Yusuf, son of President Muhammadu Buhari, is currently enrolled in serving the country. In a post shared on the Insta-story of his sister Zahra Indimi, Yusuf is pictured in his National Youth Service corps uniform. He’s serving at the orientation camp in Kubwa, Abuja.

This is coming about 11 months after the President’s son had a bike injury in the Gwarinpa area of the FCT which got him admitted to a private medical facility in Abuja for a few weeks.

Yusuf had on Tuesday, December 26, 2017, sustained a head injury from a bike crash, breaking one of his limbs in the process.

He was thereafter rushed to the Cedar Crest Hospital, Gudu District, for treatment.

“He has undergone a surgery at a clinic in Abuja. He is in a stable condition,” the Senior Special Assistant to the President on Media and Publicity, Garba Shehu, had said.

Viral photo of President Buhari’s children helping him get…

The young man was later flown out of the country and returned hale and hearty on March 1, 2018.

She shared the information on her Insta-story on Instagram, showing Yusuf’s photograph in the NYSC kit.

The NYSC secretariat could not be reached for comment as of the time of filing this report.

Viral photo of President Buhari’s children helping him get dressed