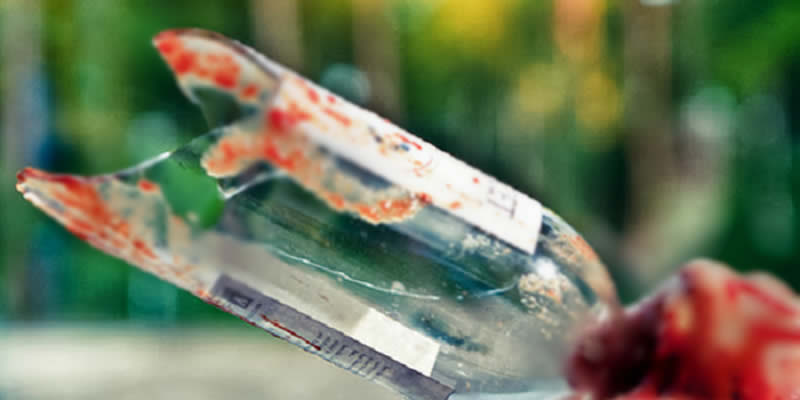 The police have arrested a 25-year-old man, Morenikeji Oguntoyinbo, for allegedly stabbing his friend, Emmanuel Ibeh, in the neck with a broken bottle during a scuffle in their residence on Benson bus stop, Ikorodu, Lagos.

NAN learnt that the incident happened when Ibeh requested for his N400, which he gave to Oguntoyinbo to keep for him and after about an hour, Oguntoyinbo allegedly said he had used the money to place a bet on a sports betting app but was not lucky to win.

It was gathered that the victim was annoyed that he used his money to play Nairabet and he allegedly gave Ibeh a fist blow, which got Oguntoyinbo angered as he went downstairs, took a bottle and stabbed the victim in his neck.

The police prosecutor, Sergeant Mary Ajiteru, informed the Candide Johnson Magistrates’ Court, Ikorodu, where Oguntoyinbo was arraigned on two counts, that the injury was so severe and the victim had been taken to three general hospitals in Lagos, including the Lagos State University Teaching Hospital, Ikeja, which referred him to the University College Hospital in Ibadan, Oyo State, adding that the chances of his survival were low because Ibeh was presently in a state of comma.

READ: Man slap wife to death in Lagos over infidelity

The charges read, “That you, Morenikeji Oguntoyinbo, on October 26, 2018, around 4pm at number 16, Benson Bus-stop, Ikorodu, in the Ikorodu Lagos Magisterial District did unlawfully stabbed one Emmanuel Ibeh on his neck with a broken bottle, with the intention to kill him and endanger his life, thereby committing an offence punishable under Section 230 of the Criminal Law of Lagos State, Nigeria, 2015.

“That you, Morenikeji Oguntoyinbo, on the same date, time and place at the aforementioned magisterial district, did unlawfully stabbed one Emmanuel Ibeh with a broken bottle on his neck and cause him grievous harm and thereby committing an offence punishable under Section 245 of the Criminal Law of Lagos State, Nigeria, 2015.”

Oguntoyinbo, however, pleaded not guilty to the charges.

The presiding magistrate, Mr W. B. Balogun, granted the defendant bail in the sum of N1m with two sureties, one of whom must be a close relation and one should be a civil servant and they must have proper means of identification in addition to producing evidence of six years’ tax payment.

The case was adjourned till December 13, 2018. You may also like to read; Man who parked car on Third Mainland Bridge, jumped into lagoon, is dead