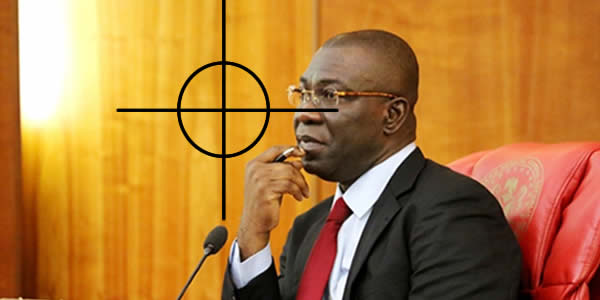 The Deputy President of the Senate, Senator Ike Ekweremadu in the early hours of Tuesday escaped assassination attempt alongside his wife and one of his sons.

But one of the assassins was overpowered and arrested.

The suspect has been handed over to Apo Police Station for investigation.

The incident was confirmed in a statement by Uche Anichukwu, who is the Special Adviser on Media to Ekweremadu.

“The Deputy President of the Senate, Senator Ike Ekweremadu, his wife, and son escaped an assassination attempt at about 4am on Tuesday.

I can not be attacked by IPOB members outside Nigeria – Chris…

“The armed men discreetly evaded the security at Ekweremadu’s Apo Quarters residence, to gain entry into his house.

” The attackers, who could not immediately shoot in order not to attract the attention of the security personnel on duty, took hold of his son, and commanded him to lead them to the Senator’s bedroom.

” It was in the ensuing struggle in the Senator’s bedroom that security was alerted, leading to the arrest of one of the assailants with dangerous weapons and housebreaking devices, while the rest managed to escape.

“The arrested member of the gang has, however, refused to divulge any information on the operation and has been handed over to the police.

“Ekweremadu, his wife, and one of his sons were in the house at the time of the attack.

“It could be recalled that the lawmaker narrowly escaped an attempt on his life in Abuja on November 17, 2015.

“Although the 2015 incident was reported to the security agencies, nothing has been heard about the matter till date.” You may like to read; ‘If I want, I’ll remain in the senate forever’ – Ekweremadu