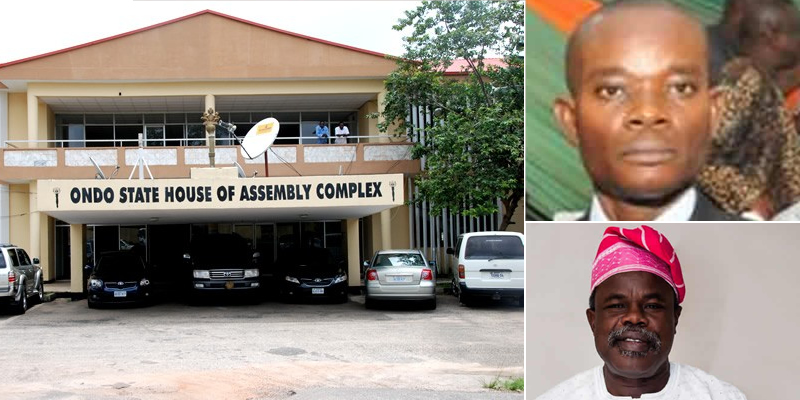 Both leaders were impeached on Friday on allegations of “gross misconduct.” Iroju Ogundeji was impeached earlier this year, but he was later reinstated.

Their impeachment was related in a tweet on the Twitter handle of the Ondo State All Progressives Congress, @Ondo_APC, on whose platform both were elected in 2015.

The Ondo state Speaker, Bamidele Oloyelogun & Deputy, Iroju Ogundeji of the house of assembly has been impeached. Both were impeached over gross misconduct.

After the impeachment of the two officers, the lawmakers elected Mr. Olamide George (APC-Akure North Constituency) as the new Speaker, while lawmakers Abimbola Fajolu (APC-Ile Oluji/Oke Igbo Constituency) emerged as the Deputy Speaker.

The changes were effected in a rowdy plenary session where Jumoke Akindele (APC-Okitipupa Constituency 2) was picked as the Acting Speaker, prior to the emergence of the new leadership.

In his inaugural speech, the new Speaker, Olumide George, said that the impeachment of the two leaders was aimed at correcting certain lapses in House, including misconduct, and not a witch-hunting of anyone.

NAN also reports that 18 lawmakers, out of the 26 members of the House, carried out the impeachment; while policemen were stationed around the premises to forestall any breakdown of law and order.

Another related interesting topic; Constituents begs Lawmaker, Leo Ogor who is seeking 5th term to quit and take care of his stroke ailment